JMC celebrated the outstanding achievements of five alumni and one extraordinary “friend” at its annual Alumni Awards and Friends Reception and Ceremony on October 4. JMC alumni, faculty, staff, students, as well as family, friends and colleagues of the award recipients, were on hand for the evening celebration hosted by Thor Wasbotten, JMC’s Director, and kicked off by Stan Wearden, Dean of CCI. 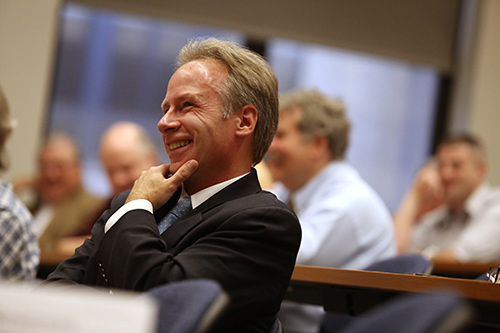 The highlight of the annual ceremony is the presentation of the William Taylor Award, the most prestigious award JMC offers to a distinguished alumna or alumnus. Wasbotten began the evening by commemorating the first Taylor Award winner, Helen Westcott Dix, ’38, who died on October 2. “Helen was a woman of remarkable firsts. She was one of the first female editors of the Daily Kent Stater, and the editor’s office is named in her honor. In 1957, she became our first Taylor Award winner and she was the founder and first president of the former KSU Journalism Alumni Association. In 2005, we honored Helen as one of four ‘Women of Distinction.’ Helen and her family were great friends and supporters of the School, and established the Robert C. and Helen Westcott Dix Scholarship, which benefits two journalism students each year.”

The 2013 Taylor Award recipient Sam Roe, ’83, exemplifies the high standards set by Helen Dix. Roe, an investigative reporter with the Chicago Tribune, won a Pulitzer Prize in 2008 as a member of the reporting team that investigated unsafe children’s products and has been nominated for a Pulitzer Prize three times, in 2000, 2011 and 2013. He has won dozens of national awards and reported from the Balkans during the Bosnian war, the Middle East during the first Gulf War and Saudi Arabia after 9/11.

Despite these national honors, Roe believes his finest reporting actually occurred when he served as an investigative reporter for his hometown paper, The Blade in Toledo, when he spent two years investigating the toxic metal beryllium, used in making Cold War-era weapons. Roe’s investigation resulted in the Department of Energy creating a national compensation plan worth $8 billion for those affected by beryllium disease and related illness.

In presenting the award to Roe, Wasbotten recalled Roe’s reaction when he learned he won the Taylor Award. “He was clearly delighted, and his response was unforgettable. He said, ‘I would give up my Pulitzer for the Taylor Award.’ Fortunately, Sam, that won’t be necessary.”

In his acceptance remarks, Roe recalled his first days on the Kent State campus, walking through Taylor Hall and seeing a glass case displaying the William Taylor Award. “Seeing the Taylor Award as a new freshman, I was terrified, but I was also inspired that I was in the right spot. I was lucky to have professors – including Fred Endres, Joe Harper, Bruce Larrick, Judy Myrick and Evan Smith – in the mold of William Taylor. They taught me the nuts and bolts of reporting, but they also taught me that journalism should be compassionate and fair.”

Roe, a Daily Kent Stater editor during his senior year, recalled how hard students at the Stater worked. “They literally worked around the clock on the paper. Journalism takes hard work, effort, and commitment.”

In his remarks and in a conversation with the audience moderated by emeritus professor Barb Hipsman, Roe spoke candidly about the future of journalism and investigative reporting. “The Chicago Tribune is for sale. The newspaper business is tough. People say long-term investigative reporting is expensive, and we’ve seen lots of layoffs. But the flipside is that the Tribune has sharpened its focus. Investigative reporting is part of our core mission. I spent two years working on my last story. What a luxury that is,” Roe said. “Thirty years ago, we didn’t envision constant breaking news or journalism on a handheld device. Journalism today is better than it was 30 years ago, and 30 years from now it will be even better. The future is bright because of places like Kent State. I’m proud to be associated with William Taylor, one of our finest journalists.”

Among the annual honors are awards for alumni who have been early and significant achievers in their career fields. The 2013 Fast Track Award winners are Shannon Lanier, ’03, an international TV show host, author, motivational speaker and real estate agent who is now co-host of “Arise Entertainment 360” and was recently honored by Jet Magazine as a “40 Under 40 Trailblazer”; and Jenn Yokley, ’10, the manager of Corporate Communications for Quicken Loans Arena and the Cleveland Cavaliers, who now managers social media strategy for both organizations. Their awards were presented by CCI Associate Dean LuEtt Hanson and JMC professor Michele Ewing, respectively. 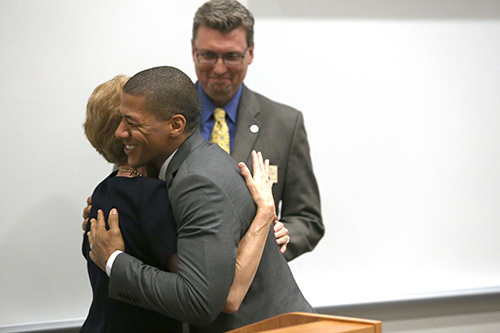 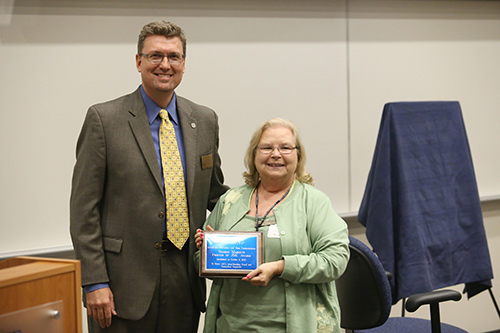 Wasbotten surprised the audience – and the honoree – when he announced a third “Friend” award, given to
Sharon Marquis, who has served JMC for 42 years and will retire at the end of 2013. Marquis began working with the Daily Kent Stater at age 21, and later became an administrative assistant to the School’s Director. Wasbotten formally established the JMC “Friends” award as the “Sharon Marquis Friends of JMC Award” and named Marquis the first recipient.

“There is no question about JMC that is too difficult or obscure for Sharon to answer. She knows our history thoroughly, she knows just about every inch of the building, and she knows where our skeletons are buried – but she never tells,” Wasbotten said. “Best of all, she remembers our students and alumni. She’s the friend who opens her home on Thanksgiving to students who are stranded at Kent State; she’s a vital link to our alumni; and she’s the smiling face of JMC for our prospective students and parents.”

Marquis received a standing ovation from the crowd and said simply: “I spent 42 years in this School and no place else. My heart is right here.”

The evening also included an auction sponsored by the Kent State chapter of the Public Relations Student Society of America.