When Kent State University art professor Don King spotted the tall, spongy brown sprout under a beech tree, he felt a familiar adrenaline rush – that feeling of thrill that all treasure-hunters experience when eyeing their prize. 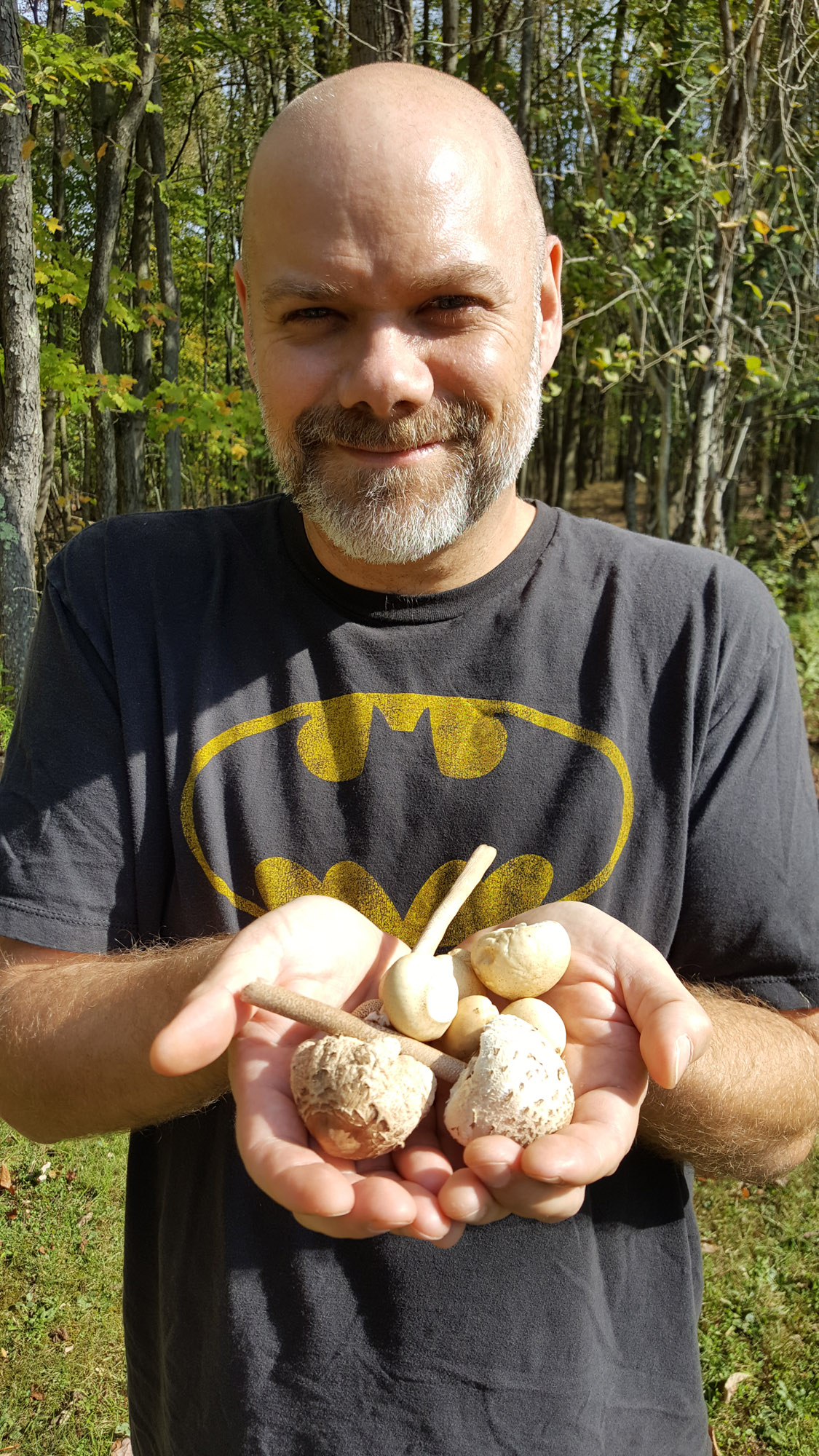 A lone parasol mushroom stood at the base of the tree nearly hidden among the fallen leaves.

“This is my favorite mushroom of all time,” Mr. King said, crouching down to confirm that the fungus was indeed his beloved parasol.

In more than a dozen years of mushroom hunting, Mr. King previously had found only three parasols.

On this warm and sunny October day, he would discover two along the trails inside West Branch State Park, one of his favorite hunting spots, just outside Ravenna, Ohio in Charlestown Township.

A second was found lurking under another beech tree nearby.

As he surveyed the edible prizes in his basket, Mr. King began thinking about how he would prepare them.

One of the parasols was a day or two past its prime.

Perhaps, Mr. King theorized, he would soak the mushroom a bit in water first to rehydrate it. Then, he would saute the pair in butter, seasoned with nothing more than a little salt.

Just two parasols were not enough to prepare anything fancy. Better to enjoy them unadorned so their intense meaty flavor was pure, he decided. Each parasol cap packs the flavor of about a pound of many mushroom varieties, he noted.

Mr. King, who teaches digital media and sculpture as an adjunct professor at Kent State, is as passionate about mushrooms as he is about his art.

To Mr. King science, art and spirituality are all intertwined and nowhere do those three coexist more clearly than on a mushroom hunt.

The science is in knowing the mushroom varieties and where to find them. The art comes from the creative cooking that follows the hunt. The commune with nature provides the spiritual component.

Mr. King has loved mushrooms since he was a small child growing up in Perry, Ohio, even though, at the time, he was eating the uninspired slices from a can. Something about their texture and savory flavor appealed to his young palate. As a youth, he also developed a love for cooking, often preparing meals for his family while still in high school.

As he got older, Mr. King discovered more fresh mushroom varieties in the grocery store.

Then one day, about 13 years ago, Mr. King caught a television cooking show that featured an Irish husband and wife pair of chefs, who foraged for and then prepared baskets of wild mushrooms.

He was awestruck by the wide variety -- their shapes, sizes and colors -- and became inspired.

With the help of the internet and “The Audubon Field Guide to North American Mushrooms,” a gift from his brother-in-law, King became a self-taught student of wild mushrooms. 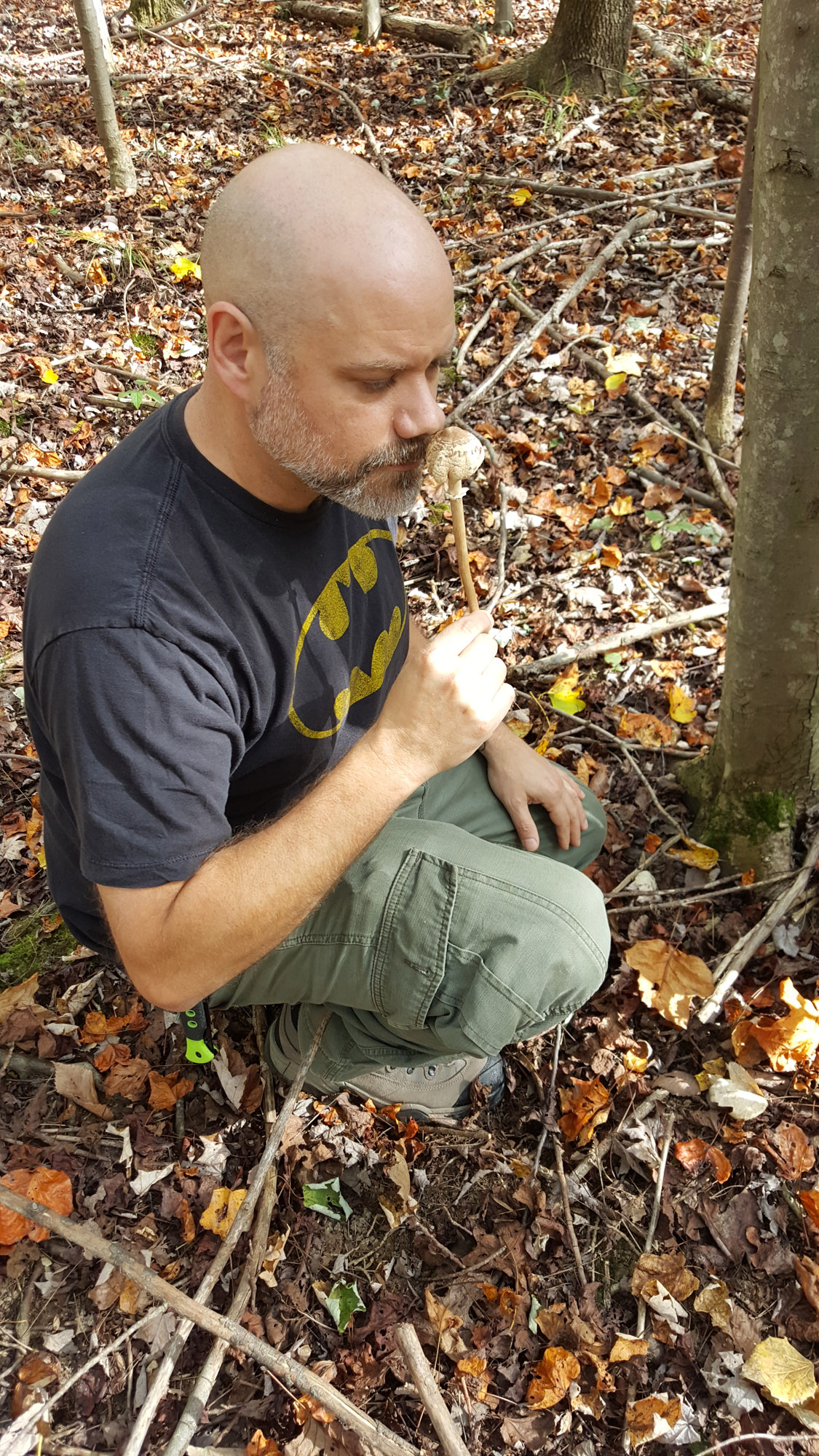 He started with ones he could routinely find in his own yard, including giant puff ball mushrooms, which he describes as “the tofu of the woods.” With a texture resembling the bean curd and a similar bland flavor, puff balls, like tofu, also will take on the flavors of what they are cooked with, Mr. King explained.

Over the years Mr. King has learned how to identify the many wild varieties that are available in northeast Ohio, (there are about 70, including medicinal mushrooms and toxic ones).

He knows the best time of year to hunt for specific varieties and the best places to look, as well as the places to avoid.

Mr. King prefers hunting in state parks because most permit foraging for wild edibles without a permit. National parks and metro parks typically do not allow foraging, and fines can be hefty for violators, he explained.

Often times, though, he is able to find an edible variety or two in his own lawn.

Very few wild mushrooms are toxic and even fewer are lethal, Mr. King explained, but if he’s not sure of a fungus, Mr. King practices caution and avoids it. “I don’t take chances,” he said, noting also that he always cooks his wild finds and never eats them raw.

The hen-of-the-woods variety, also known as maitake, is one of Mr. King’s favorite fall finds.

Over the years, his foraging has expanded to include other wild edibles such as ramps and fiddlehead ferns in the spring. His cooking skills, too, have grown to match his hunting ability.

King also has become expert at knowing which grocery stores and international markets will stock his favorites, a skill that comes in handy during persistent dry weather when wild mushrooms don’t thrive.

In the Kent area, Mr. King has garnered a reputation as an accomplished amateur chef. He is a three-time winner of the Vegan Iron Chef cooking competition held annually as part of the Who’s Your Mama Earth Day Festival in Kent sponsored by Standing Rock Cultural Arts.

Mr. King also is a recurring guest on FOX 8’s “New Day Cleveland,” where he demonstrates how to cook with wild edibles.

“He is an unconventional chef in that he likes to go out and forage for his ingredients,” said Jeff Ingram, executive director of Standing Rock.

Part of the iron chef contest’s judging criteria, Ingram explained, is that the foods used must be organic and local – an area where King always scores high.

“He is always able to find something good, whether it is early garlic scapes or morels,” Ingram said. “He is able to find things that are local and make them into delicious dishes.”

Mr. King has won the competition enough times that he is prohibited from being a contestant, at least for the next few years.  Although, Ingram said he likely will invite professor King back to be a judge for the cook-off.

Mr. King shares his adventures in mushroom hunting and cooking with the public, through his website, www.themushroomhunter.com, where he offers hunts, camps and workshops for those who want to learn more.

While his 16-year-old daughter, Jenna, does not enjoy hunting with him, he said she has become a mushroom lover like her dad.

“She definitely will eat anything I make with them,” Mr. King said.