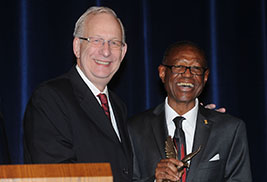 Gene Shelton, associate professor in the School of Journalism and Mass Communication at Kent State University, has been awarded the university’s 2013 Diversity Trailblazer Award. Kent State’s Diversity Trailblazer Award is a universitywide award that recognizes faculty, staff or a departmental group for their significant contributions to enhance diversity and inclusive excellence at Kent State.

“There were several strong nominations for the 2013 Diversity Trailblazers Award, but out of them all, Gene Shelton’s rose to the top,” says Alfreda Brown, vice president for diversity, equity and inclusion at Kent State. “Gene Shelton is known as a champion of inclusive diversity and a strong advocate for diversity issues in faculty deliberations. His quiet, passionate but firm way of encouraging openness and helping others understand the challenges of diversity has had a lasting impact upon his colleagues.”

Shelton, who also serves as co-chair of the diversity and globalization committee for the School of Journalism and Mass Communication at Kent State, says he was overwhelmed when he was notified he would be the recipient of this year’s Trailblazer award.

“I am so honored,” Shelton says. “Students, colleagues and everyone at Kent State have played a major role in my growth on this campus. This is the highlight of my entire career.”

Shelton’s career spans more than four decades. After graduating from Kent State in 1972, he became a reporter for The Cleveland Press and host of a public affairs program on Cleveland's NBC affiliate WKYC-TV. While studying for his master’s degree at the University of Wisconsin, he was hired to teach journalism at UW-West Bend and he served as the campus public information officer.

An assignment to interview acclaimed singer Roberta Flack for a Milwaukee Sentinel feature in 1975 influenced a career change and a move to Los Angeles. Shelton was hired as a writer and publicist for Motown Records. From Motown, he moved to CBS Records were he worked for Columbia and Epic Records. At Epic, he was Michael Jackson’s press agent and wrote the bio for the multiplatinum album Off The Wall. He was called back to Motown in 1981 to be the label’s manager of press and artist relations.

“I just want to keep getting better,” Shelton adds.