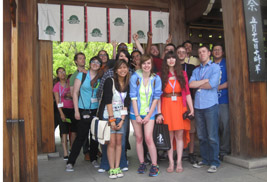 Kent State students of Japanese got a crash course in cultural immersion earlier this year, thanks to the efforts of Kent State Professor of Japanese Translation, Judy Wakabayashi, who escorted two different groups to Japan in December 2012 and May 2013.

Wakabayashi received two grants to fund the trips. Fourteen students went on the December trip, which was funded by the Japan Foundation. The May trip was funded through a new initiative from the Japanese prime minister and was free to all 25 participants.

Wakabayashi created the itinerary for the first trip by covering themes explored in her Japanese Culture class. The Japan Foundation grant covered the major expenses for this trip, with additional support from the College of Arts and Sciences. The group traveled to many different parts of Japan, including a festival in Fukuoka, a tour of the Japanese parliament and the Peace Memorial Museum in Hiroshima. They also took a class focused on the relative cultural impact of Japan and other nations at Hiroshima Shūdō University, and attended a class about corporate social responsibility in Japan at Rikkyo University in Tokyo.

“We stayed in Japanese-style accommodations, including a ‘capsule hotel,’ a Japanese inn and a homestay,” Wakabayashi says. “We found our own places to eat and trekked our suitcases through the stations ourselves.”

“We had already learned so much about Japanese culture in class, but to see it close up in real life was astonishing,” says Laura Graham, a tourism management major. “It is not a real experience unless you dive deep into the culture, which was exactly what we all did, because when you go headfirst into a culture like this, you become more aware, and when you become more aware you become a better person.”

“The entire experience has been a wonderful way to learn about Japan and connect directly with the people and culture in a way that textbooks simply cannot provide,” says Emily Russo (engineering technology and international relations). “I cannot wait now to begin work in Japan, returning to a country that for two weeks may as well have been home.”

The second trip was sponsored by the Japanese government and this meant the students were able to meet politicians and pop idols and attend performances of traditional dancing and ‘sit-down’ comedy arranged specifically for the trip, says Wakabayashi.

During the second trip, they visited many different places in Tokyo, as well as the Disaster Reduction and Human Renovation Institution in Kobe, a sake brewery and hot springs. The students spent an afternoon at Kwansei Gakuin University, meeting students there and attending a tea ceremony.

“On the second trip we were pampered with a chauffeured bus and at least one guide at our service for the whole trip,” says Wakabayashi.

Wakabayashi says the students got many things out of the trip.

“They are now more motivated in their studies, impressed by how safe, clean and efficient Japan is compared with the U.S., and impressed by the Japanese people’s appreciation for nature, to name a few aspects,” she says. “The most rewarding aspect for me was seeing how much this experience meant to all the students. In addition, traveling with nearly 40 students for about a month has given me a better idea of their interests and knowledge in relation to Japan, so I’ll be bringing this understanding to the Japanese Culture class in the fall.”

For more information about the Department of Modern and Classical Language Studies, including the Japanese program, visit www.kent.edu/mcls.