It’s not every day that a college student is awarded a medal or receives a special visit from a congressman. But that’s exactly what happened to a Kent State University student when he was honored for his initiative, achievement and service. 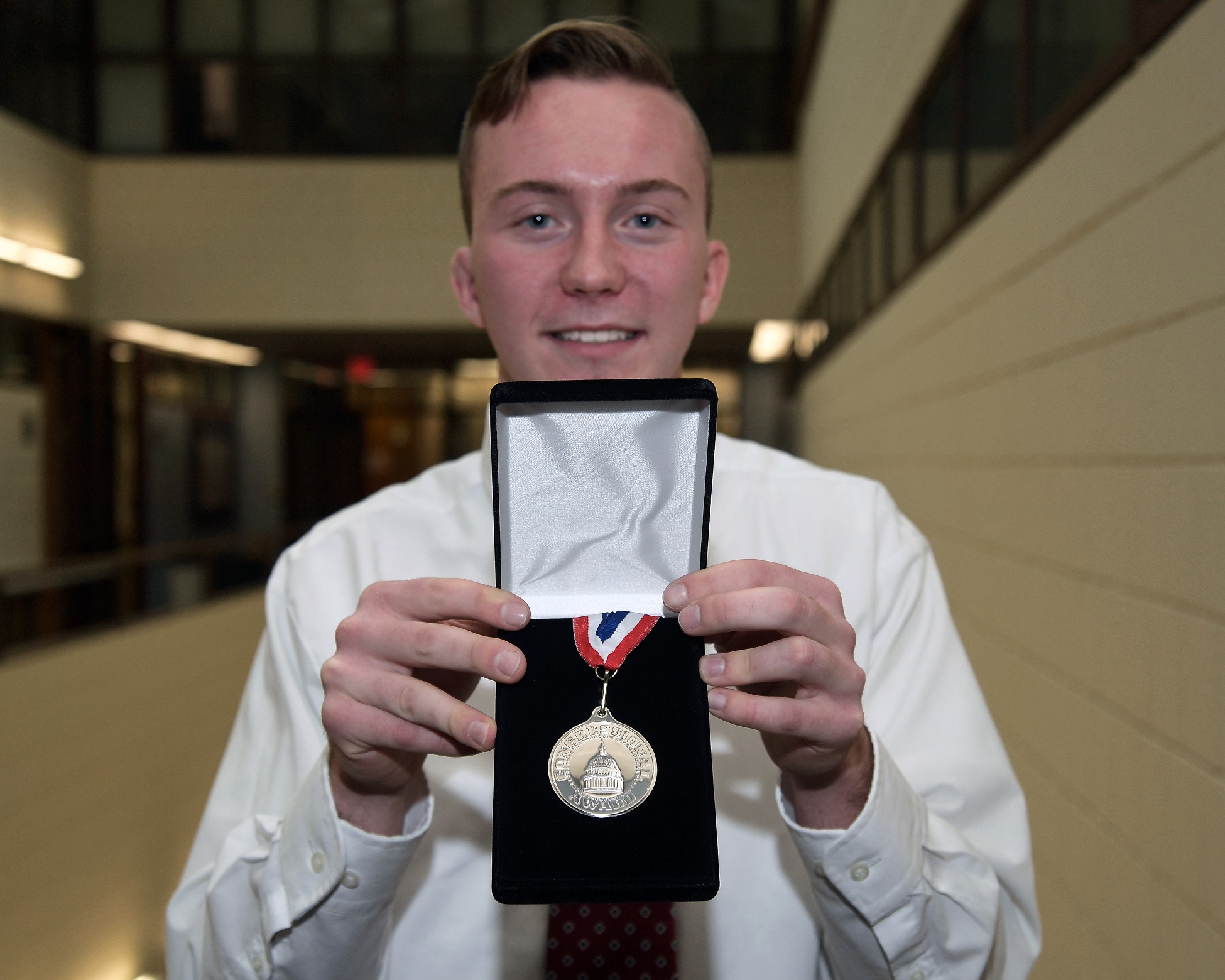 U.S. Rep. Tim Ryan presented Kent State nursing major Austin Croft with the Congressional Award Silver Medal on Tuesday, Nov. 27. Mr. Croft, of Akron, Ohio, was recognized at a ceremony that took place at the College of Nursing where he was praised for his dedication to improving himself and his community. Recipients of the Congressional Award Silver Medal have earned one of the highest honors Congress bestows upon a youth civilian.

“This award represents the best we have in the United States,” U.S. Rep. Ryan said. “It is not solely about grades, athleticism or scientific achievement, but rather about our young citizens’ commitment to bettering themselves and giving back to their communities. Austin has distinguished himself amongst his peers. He is an example of what our community and country need more of, people who care about other people.”

In earning his Congressional Award Silver Medal, Mr. Croft has logged hundreds of hours across four program areas: voluntary public service, personal development, physical fitness and expedition/exploration. Throughout this challenge, Mr. Croft has volunteered at Cleveland Clinic Akron General, raised $200 for the National Alliance on Mental Illness, worked part time at a Boy Scout summer camp as a lifeguard and visited the MAPS Air Museum to learn about aviation, among many other activities.

“We at the College of Nursing are proud of Austin for his dedication to the community and his personal growth,” said Barbara Broome, dean of Kent State’s College of Nursing. “Our mission at the college is to foster ethical and humanitarian values in our students, and Austin exemplifies those values. His efforts are highly commendable and demonstrate that he has the qualities to become an exceptional nurse leader.”

“I didn’t realize how much one person could impact people’s lives just by the small things we do,” Mr. Croft said. “From this experience, I discovered just how much it means to give back to your community.”

Receiving the Congressional Award Silver Medal has been a long-term goal of his, who initially learned about it from a fellow student during his sophomore year of high school. To Mr. Croft, this award represents sticking with a goal until it is finished.

“I wanted to show myself that if I strove for something I could achieve it,” Mr. Croft said. “I am excited to be awarded the Congressional Award Silver Medal, and I am amazed by this accomplishment.”

He credits this achievement to the support and encouragement he received from family and friends, especially that of Sandra Bradbury, his advisor at Akron Early College High School.

Upon completing his bachelors and master’s degrees, Mr. Croft intends to become either a flight nurse or a nurse anesthetist. His desire to become a nurse stems from his family who has a tradition of nursing. Mr. Croft’s commitment and desire to serve others are further enhanced by his current service in AmeriCorps.

To achieve the Congressional Award Silver Medal, Mr. Croft had 12 months to complete a total of 400 hours in the program: 200 hours of voluntary public service, 100 hours of personal development, 100 hours of physical fitness and two consecutive overnights for the expedition/exploration category.

Learn more about the Congressional Award