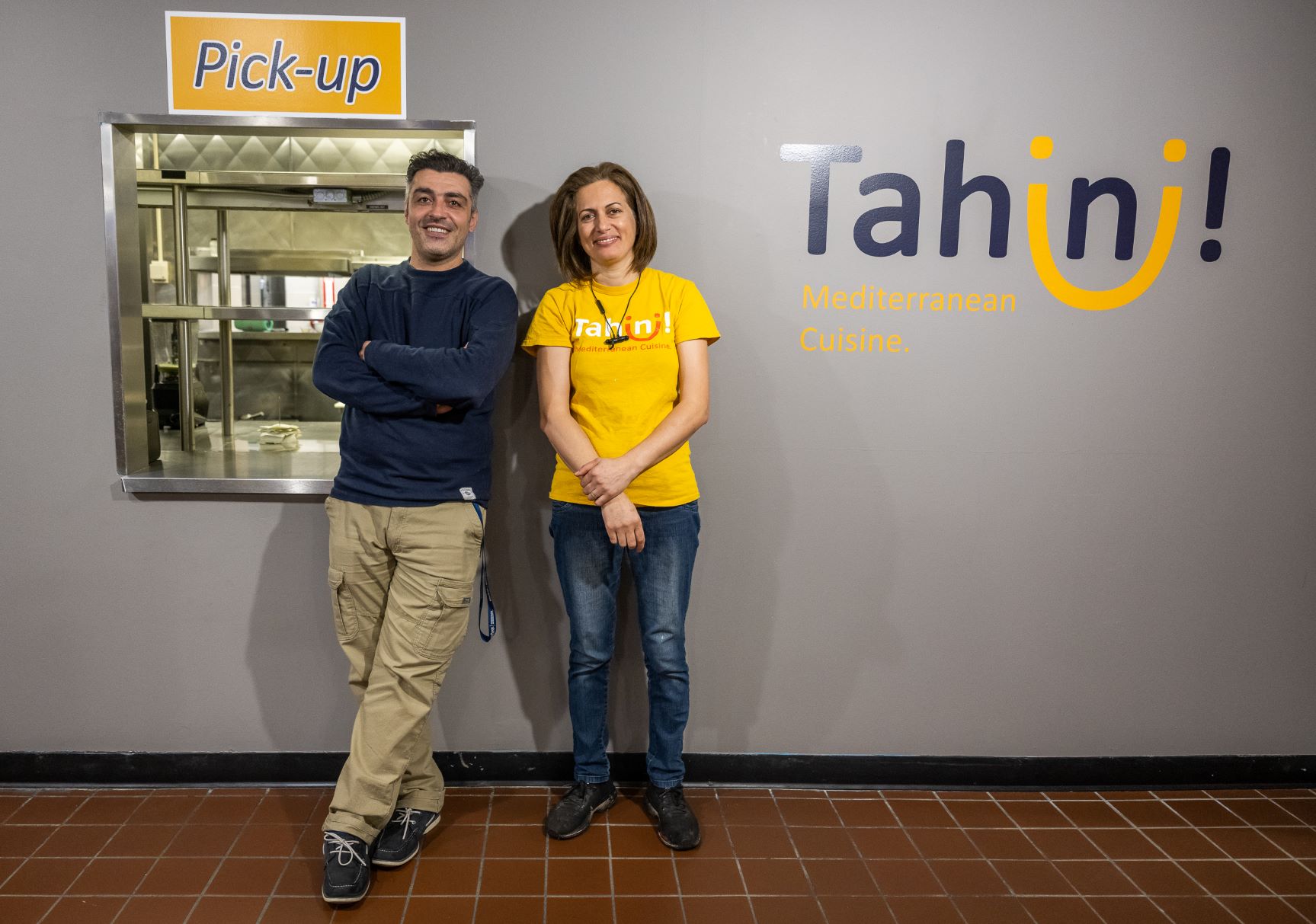 Tahini! Offers a Taste of the Middle East to Diners at Rathskeller

Two Syrian immigrants who met by chance when one was taking an English as a Second Language class from the other, have joined forces to bring a taste of their homeland to Kent State University diners.

Tahini! Mediterranean Cuisine opened Sept. 6 in the basement level of the Kent Student Center inside the Rathskeller, a hangout space for students that reopened this semester after being closed for several years.

Ayham Abuzeid and Layla Alchaer, both of Kent, are the duo behind the new eatery, which features Middle Eastern wrap sandwiches such as falafel and chicken shawarma, as well as humus, mujaddara (a dish of seasoned lentils and bulgur wheat) and baklava.

Many in the Kent State community may recognize their cuisine from the food truck of the same name they have operated for the past two years.

Abuzeid, a native of Aleppo, Syria, earned a bachelor’s degree at Kent State in 2008 and a master’s degree in teaching English as a second language in 2010. He is currently working on a doctorate degree. He has worked at Kent State since 2012 as an associate lecturer in the Department of English and an advisor in the ESL (English as a Second Language) Center.

Abuzeid and Alchaer met in 2016 when she took an ESL class. The pair began chatting after class and discovered that not only were they both from Syria, but they lived in the same neighborhood in Kent and their daughters were born on the same date.

Their friendship eventually turned into a business partnership. Alchaer, whose husband is an engineer at Goodyear in Akron, enjoys cooking and often would take on small catering jobs, while Abuzeid was looking for a business project on the side. Alchaer was not looking for a full-time job, but something limited to the hours her daughter was in school. Together they came up with the idea for a food truck. The pair could set their hours without the commitment of a brick-and-mortar restaurant.

They launched Tahini! the food truck in May 2020, when the campus was shut down due to the pandemic. It was challenging, but they built a small, loyal following of those in Kent looking for lunch options when so many restaurants were closed.

“People started to know Layla and her food,” Abuzeid said.

They gave a lot of consideration to moving into a permanent location because Alchaer did not want too many hours. However, they eventually determined that they could train and hire a crew to work when she could not, so they decided to look for an opportunity. That came about over the summer when the university decided to reopen the Rathskeller, a traditional student hangout space in the basement of the student center, and was looking for someone to provide food there.

The pair learned on Aug. 1 that Tahini! had been selected for the space and had only a month to get their restaurant up and running.

Jill Jenkins, senior executive director of University Housing and Culinary Services, said the partnership with Abuzeid and Alchaer aligned perfectly with their desire to grow their business and the university's commitment to bring back the Rathskeller space, which had been vacant for a few years.

“Tahini! is the perfect complement to the culinary program," Jenkins said. "Selecting Tahini! as our partner was an easy choice given their commitment to the community and, of course, the delicious menu!”

The secret to their food, she said, is using only fresh, high-quality ingredients. Their shawarma, for example, is made from chicken that they slice themselves, rather than the large spits of meat that often are used for the sandwiches, because she is concerned about the freshness of the spits that may take days to use.

Their shawarma meat is sliced and marinated in a mixture of olive oil, vinegar and spices, before being grilled and rolled inside a pita with pickles and garlic sauce, then grilled again to give the wrap sandwich its crispy exterior. 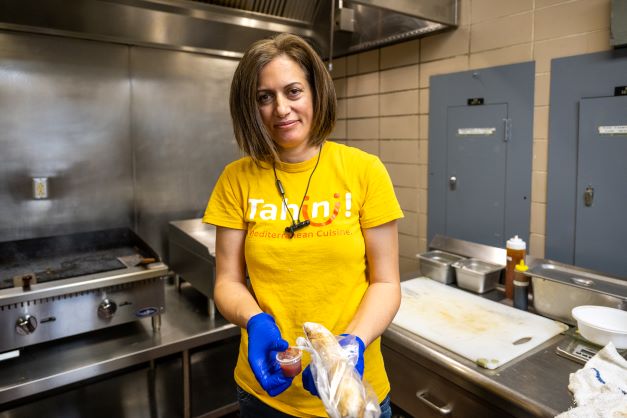 With the opening of Tahini!, Muslim members of the Kent State community now have a place on campus that serves halal meats, which are butchered according to Islamic practices. All the meat served at Tahini! is certified halal.

The eatery offers a small menu which includes vegan and vegetarian options, all from authentic Middle Eastern recipes and preparation, Alchaer said. Having to get the restaurant up and running in a brief time did not allow for expanding the menu beyond the staples they served on the food truck. But Abuzeid said an expanded menu will be coming, with more items based on the feedback they have received from customers so far.

The restaurant was named Tahini! after the sesame seed paste that is a key ingredient in hummus, the chickpea dip that is a Middle Eastern staple. Alchaer’s son suggested the name when they started the food truck.

The partners agree that the point of their business is to have an impact and to help create an identity and culture for the food of their homeland. Seeing customers happy with the food, Alchaer said, is worth more to her than the monetary profit.