Kent State Prepared Journalism Alumna for a Career in Healthcare Advocacy, Communications — Today, She Gives Back 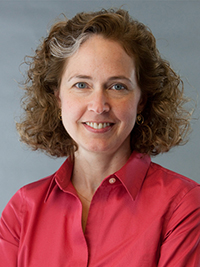 Laura Gordon, '87, had such a fulfilling experience as a Kent State University student, that she now gives back so that others may find their way to the types of relationships and encounters that helped set her on her path.

When her adult children — one recently graduated and one still in college — were looking at schools, she encouraged them to “dig deep” into their majors and find those relationships and activities that the university offered.

“I really experienced that myself with my professors,” Gordon said. “Tim Smith ... and Carl Schierhorn were both so supportive in helping me find my path and get out into the world.”

And beyond her own family, she supports today's Kent State School of Media and Journalism students in their pursuits through a scholarship in her parents' names.

“The scholarship that I pay into allowed me to do something that didn’t require an enormous commitment but still allowed me to feel connected and to feel like I was giving back,” she said.

After she graduated from Kent State, Gordon pursued healthcare journalism, transitioned to public relations, and now advocates for pediatric research in the nonprofit world.

“I was a journalist for about 10 years and then Edelman recruited me to run their editorial division, and that’s how I decided to make the leap into PR,” she said. “I did that element for 22 years, and when I left I was running the healthcare practice at the Washington office.”

Gordon said she wanted a change after feeling like she “had done it all.” To encounter a new challenge, she began researching healthcare jobs.

“I was connected to a recruiter, and they had this job opening for a new nonprofit group (that) just formed about a year before I joined it,” Gordon said. “It had been created by a multidisciplinary group of healthcare leaders and they were all concerned about the delays in pediatric research.”

The delays often experienced are betwen the time a drug comes to market for an adult, Gordon said, the time it takes for the FDA to do studies in children for the same drug. The process can often take a decade. The Institute for Advanced Clinical Trials for Children, according to its website, serves "as a neutral and independent organization on behalf of children everywhere, bringing a dedicated voice to the advancement of new medicines and devices needed now and in the future."

“This nonprofit’s whole goal was to help pharma companies accelerate their studies in an efficient, but also of course, regulatory manner,” Gordon said. “I knew a lot about pediatric research and clinical trials already. For me, the new learning was really more about the business side of things.”

Gordon had a myriad of experiences after attending Kent State, but while she was a student, she and another student were responsible for founding what’s now known as the university’s general interest magazine, The Burr.

“It really gave me great experience in working within the structure of the university (and) really understanding, ‘How do you navigate that?’” she said. “But what we realized was that it was such a big university that no one really cared about the yearbook anymore.”

Gordon said they felt it was their job to tell that story and help people understand why they wanted to make such a big change.

“We made sure the first issue was almost a kind of gift back to the leadership of the university by having a little fun with it and showing that this magazine was something that was really going to be good for the university,” she said.

Kent State is known for accepting the most students from different backgrounds, and Gordon said she noticed and appreciated this.

Exceeding Expectations in Film and Production
After 20 Years as an Entrepreneur, Alumna Returns to News Industry as a CEO
Students Create Digital Collection of Stories About Refugee Resettlement in Akron
College of Communication & Information
School of Media and Journalism