Gary Hanson, beloved emeritus professor in the School of Journalism and Mass Communication (JMC) at Kent State University, died on May 18, almost seven years after being diagnosed with cancer.

Gary retired from Kent State in 2016 and was a favorite of students and alumni during his 18-year tenure in JMC. He taught Broadcast Beat Reporting – a make-it-or-break-it class for broadcast journalism majors that he fondly called, “the class you came to Kent State to take” – Reporting Public Affairs; Media, Power and Culture; and more. 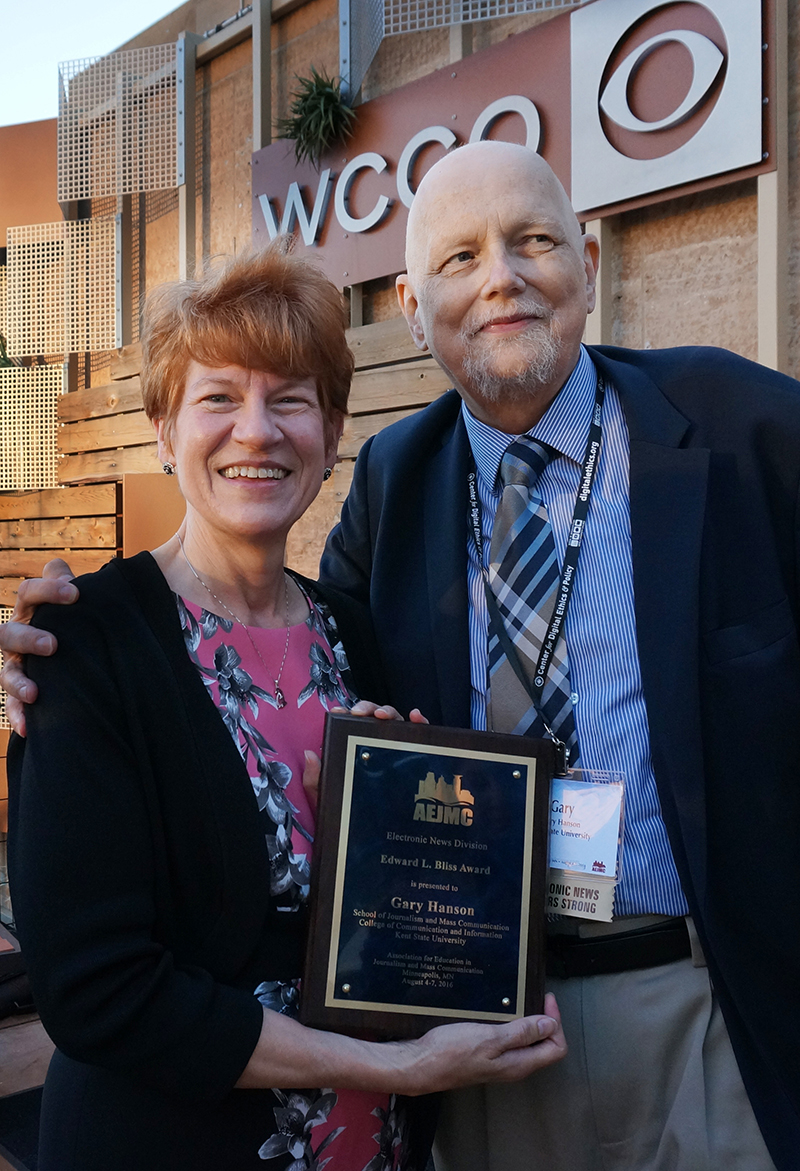 He cherished the time he spent with students inside and outside of the classroom. As adviser of TV2, the student-run television station, from 1999 to 2008 and from 2015 until his retirement, he spent many late nights working with students in the newsroom, editing suites, studio and control room, as he molded them into professionals.

Gary also pioneered study abroad opportunities for journalism and mass communication students. With his wife LuEtt Hanson, emerita associate dean of the College of Communication and Information who also retired in 2016, and his friend and colleague Mitch McKenney, associate professor, he created the International Storytelling course, which takes students to different international destinations each spring to report and tell stories. Gary and LuEtt cherished the opportunity to share their passion for global journalism and learning about other cultures with students; through International Storytelling, Gary was able to teach more than 100 students to create multimedia stories while in six countries on three continents.

In 2011, Gary earned Kent State’s most prestigious teaching honor, the Distinguished Teaching Award. Sponsored by the Alumni Association, the award is presented to faculty members who demonstrate extraordinary teaching in the classroom and a devotion to touching students’ lives. In a nomination letter, a former student wrote, “I still hear (Gary’s) voice in my head every time I write a story.” Alumni working as reporters, anchors and producers across the country often echo that statement.

Just before he retired, Gary was named the 2016 recipient of the prestigious Edward L. Bliss Award for Distinguished Broadcast Journalism Education, presented annually by the Electronic News Division of the Association for Education in Journalism and Mass Communication (AEJMC) to recognize significant and lasting contributions to the field in the areas of teaching, scholarship, and service. He accepted the award last August at the AEJMC National Convention in Minneapolis.

When reflecting on this honor, Gary shared some thoughts about his legacy in broadcast journalism education:

“If someone were to say, ‘What’s your legacy here?’, I would show them a big picture that I have of students at graduation. Knowing that I can go and point to various people on that board and I can tell you where they’re out doing good work in journalism and helping their communities understand the kinds of things they need to know, that’s extremely gratifying.”

JMC Director Thor Wasbotten reflected on Gary’s impact, “Gary was a mentor to me as well as a colleague and friend. He was a tremendously influential and effective teacher and provided service to all levels of our discipline and produced research that had national impact. Above all else, Gary accomplished all of this without compromising his principles and values of being compassionate and thoughtful, while maintaining the highest integrity and a genuine appreciation for others. We will miss him."

Amy Reynolds, Ph.D., the dean of the College of Communication and Information, shared, “Gary was a valuable and engaged member of our faculty and was widely respected within the national professional and academic broadcast journalism communities. His life’s work and his commitment to his craft and to his students is felt, literally, across the globe.”