The Media Law Center for Ethics and Access, originally named the Center for Privacy and the First Amendment, offers workshops and seminars in media ethics and access to government information. It provides advice and counsel for anyone — journalists, government officials or members of the public — with questions about ethics or access or related media law concerns. The Center was founded in 1991 to provide information and research on accessing government records and meetings. It was expanded in 2007 to include ethics training and to address issues of access and ethics in online journalism. The Media Law Center is the only center of its kind in Ohio and one of the few in the Midwest. 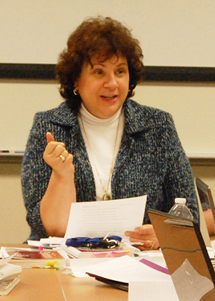 Jan Leach, director of the Media Law Center for Ethics and Access, is an associate professor in the School of Journalism and Mass Communication at Kent State. She is also an Ethics Fellow at The Poynter Institute in St. Petersburg, Fla.

Before joining the faculty at Kent State, Jan was editor and vice president of the Akron Beacon Journal for five years. During her tenure, the Ohio Society of Professional Journalists named the Beacon Journal “Best Newspaper in Ohio” three times. As editor, Jan and her staff coordinated coverage of the Sept. 11 attacks, including publishing an “Extra” edition, and launching the “Fire Truck Fund” that raised more than $1.3 million for new safety equipment for the New York City fire department.

Jan came to Akron from the Cincinnati Enquirer where she had been managing editor for nearly five years. She also was managing editor at the Phoenix Gazette, city editor at The Arizona Republic, and held various reporting and editing positions at newspapers in Cincinnati, Findlay and Fostoria, Ohio.

She has a bachelor’s degree in journalism from Bowling Green State University and a master’s in journalism ethics from Kent State.

Prof. Timothy D. Smith joined the School of Journalism and Mass Communication faculty at Kent State University in 1986 after working for 19 years for the Akron Beacon Journal, leaving as managing editor. He has also worked for the Columbus Dispatch, the Painesville Telegraph and United Press International.

He has a bachelor’s degree and master’s in journalism from Ohio State University and a law degree from the University of Akron. In 1991, while on leave from the university, Smith served as a law clerk for now-retired Ohio Supreme Court Justice Craig Wright. In June 1991, he was named acting director of the School, a post he held until June 1994, when he returned to the faculty and resumed his service as adviser to the Daily Kent Stater, the student newspaper.

In addition to his teaching duties, Smith serves as a newspaper consultant, an expert witness in media law cases and as a lecturer on media relations, libel, invasion of privacy and public records issues.

In 1996, he received the John S. Knight Award for excellence in the service of journalism by the Buckeye Chapter of the Society for Professional Journalists. In 1997, he was selected as a Fellow of the American Society of Newspaper Editors Journalism Excellence program, a summer newspaper residency for journalism professors. In 2000, he was presented with the Distinguished Teaching Award by Kent State University Alumni Association. In the fall of 2003, Smith took a professional leave to work in the Portage County Public Defender’s office, representing indigent clients in municipal and common pleas courts.

He is a member of the American and Ohio State bar associations and a founding member of the National Freedom of Information Coalition and the Media Law Committee of the state bar. In 1991, he created the Ohio Center for Privacy and the First Amendment at Kent State. In 2007, the name was changed to the Media Law Center for Ethics and Access with Prof. Jan Leach as the director and Smith as the chair.