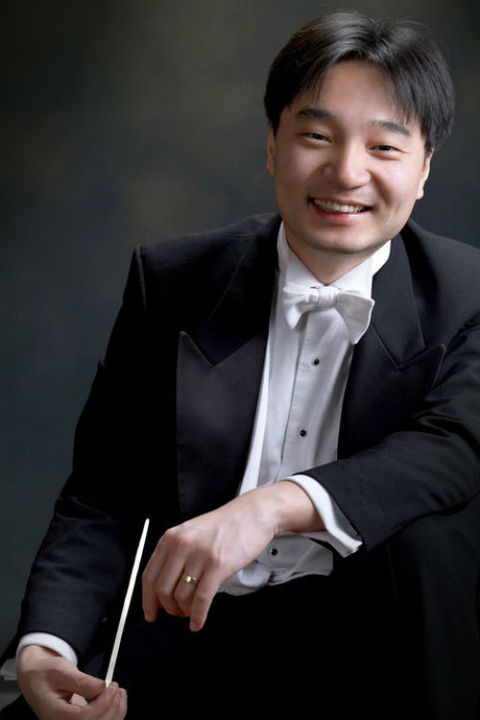 Over the last two decades of his conducting career, Dr. Jungho Kim has established an outstanding reputation for his superb musicality and leadership on the podium. He has conducted the Savaria Symphony Orchestra and Dohnanyi Orchestra Budafok in Hungary, National Arts Centre Orchestra in Canada, Northwest Iowa Symphony Orchestra, and Omaha Symphony Orchestra, as well as Rochester Philharmonic and Buffalo Philharmonic in New York State. After successfully leading the Augustana University Orchestra to a musical high point and in expansion of both its size and quality for the past two years, Kim was recently named Director of Orchestra of the Hugh A. Glauser School of Music at Kent State University in Northeast Ohio, USA.

Following his first professional three-year position as a section violinist at Gyeonggi Philharmonic Orchestra in Korea, Kim went on to earn two master’s degrees from the College-Conservatory of Music at the University of Cincinnati–one in violin performance and the other in orchestral conducting, studying with Anna Vayman and Mark Gibson. During this time, a string orchestra Queen City Virtuosi was formed at the conservatory by more than twenty graduate students from all over the world. Kim was asked to conduct the group at its inception. Together, they performed dozens of concerts in the greater Cincinnati area. They were invited to a concert series by the local radio station when their collaboration with violinist Dr. Piotr Milewski was aired on WGUC public radio.

It was the renowned conductor Maestra Xian Zhang–Music Director of the New Jersey Symphony Orchestra and La Verdi Orchestra Sinfonica in Milan, Italy–who took Kim as the Associate Conductor of the Sioux City Symphony Orchestra, where he conducted classical subscription, holiday, and pops concerts as well as educational concerts that reached out to more than 6,000 public school students in Northwest Iowa over the span of three years. Collaborations with Phil Smith (former principal trumpet, New York Philharmonic) and Huang Ruo (resident composer, Het Concertgebouw Amsterdam) mark some of the highlights from this time.

Kim completed the Doctor of Musical Arts degree at the Eastman School of Music under the guidance of Maestro Neil Varon. He served as the assistant conductor of the Rochester Philharmonic and was awarded the Walter Hagen Conducting Prize during his doctoral studies. Along with the opportunities he has had to study with world famous artists such as Maestro Kurt Masur and Pinchas Zukerman, he takes the most pride in some of the comments he has received from musicians in orchestras he has worked with–one of the evaluation sheets from a professional orchestra simply said “Hire him.” His uncanny ability to bring out the best in the people he works with has led to countless many lasting friendships and memories that speak to his humility, character, and musicality.

His biggest successes in life have been meeting his wife, violinist Dr. Eunho Kim, and raising their two boys’ Teo and Juno. They currently reside in Kent, Ohio, with their dog Kobi.