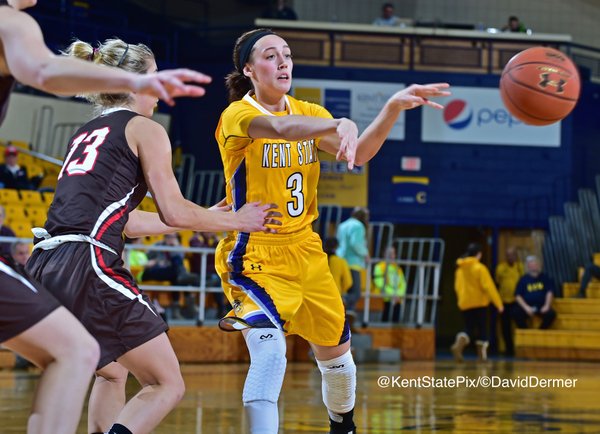 Senior nursing student by day and KSU Women's Basketball star by night, Larissa Lurken of Cottage Grove, MN, has excelled at both despite huge time commitments each demands. She recently scored her 1,000th point - a basketball career milestone.

According to Head Coach Danielle O’Banion, Larissa participates in team workouts 10 out of 12 months of the year, logging roughly 8-30 hours per week of basketball-related activities from June through April. She also travels to overnight games almost every week during their four-month season.

Larissa is the team’s second leading scorer averaging 14.7 points per game and is the leader in minutes played per game.

“This year Larissa was named MAC East Player of the Week after scoring 37 points against Northern Illinois University, making her the first player in KSU women’s basketball to do so since 2010,” said O’Banion.  “All of this is even more impressive as she misses practice every Thursday for her 12-hour nursing clinicals.”

While many students struggle to maintain balance between the demands of the nursing program and athletics, Larissa excels. She describes herself as a persistent individual, knowing she gets out the effort she puts in.

“Her commitment to both her scholastic achievement and her beloved basketball is apparent by her GPA and her performance on the court,” said Deb Cifani, CoN lecturer. “Neither are achieved without great student/player effort.”

Due to an out of town basketball tournament, Larissa contacted Deb to schedule a time to make up an exam. Deb offered to let her take the exam at 9:00 a.m. the day after her return. “She emailed me back with a request to take her exam at 6:30 a.m. that day so she wouldn’t have to miss her 9:00 a.m. practice.”

When asked about the challenges she has had to overcome as a nursing student athlete, Larissa said she has had to learn to balance time to learn with that of basketball practice and games.

“The biggest lesson I have learned is to always stay on top of my studies,” said Larissa. “Procrastination can really get to you, so staying organized and keeping up to date on things is very important.”

Larissa’s dedication to her studies has not gone unnoticed.

“The fact that Larissa can maintain excellent grades and be an athlete is a rarity in our program,” said Mary Bacha, CoN lecturer. “Most often students have difficulty doing both and will eventually give one of them up because of the rigors and expectations it takes to be successful in both.”

Larissa’s dream career is to work with children in a hospital setting. She says that basketball and her time as a nursing student have taught her to work independently and on a team, both of which she will be able to use in her career.

“I don't have a favorite college experience, but I would say that getting into the nursing program itself was a highlight, along with all of the honors I have earned playing basketball. And, of course, winning games aren't too bad either!”