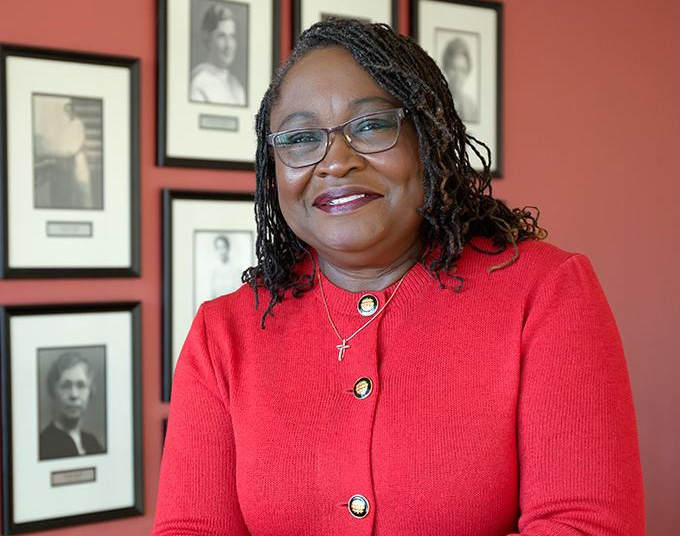 Do Not Let Anyone Define Your Future

Karen Bankston, Ph.D., MSN, FACHE, associate dean for clinical practice, partnership and community engagement at the University of Cincinnati College of Nursing, is a two-time alumna of Kent State College of Nursing. She recently shared her nursing experience with us and provided some words of encouragement for the next generation of nurses.

Like others who enter the nursing profession, Bankston’s nursing career, which has spanned over four decades, is filled with many memorable moments. The most remarkable of these experiences center on the times Bankston believes she was able to truly make a difference in the life of someone else, be that, “holding the hand of someone as they passed away, embracing a patient after they received a diagnosis, or supporting a staff member who had gone through an uncomfortable experience at work.”

It was Bankston’s mother who first encouraged her to pursue a career in nursing. “Nursing was what my mother, Bettye Jones, desired for me. I always wanted to be a teacher.” Furthermore, it was through her mother’s example, and the example of her Aunt Mary Jones Sangster, that Bankston learned what it meant and how to be a strong and focused woman. “I learned quickly it was important for me to understand how I felt about myself before I could deal with how others felt about me.” While she had to endure micro aggressions that were often rooted in racism and sexism, Bankston chose to focus on who she was as an individual, a woman, a mother, a wife, and as a professional. “Becoming comfortable with myself, and subsequently with my skills and abilities, provided me with the tools I needed to navigate waters that were often pretty rough.”

As her career began to advance, Bankston’s professional role models provided her with opportunities to grow. Ruth Eldridge, MSN, RN, vice president of nursing and chief nursing officer at Western Reserve Care System in Youngstown, OH, first recognized leadership qualities in Bankston that she did not see in herself. “She took me under her wing, sharing information with me that would later serve me well as a CNO.” Later, Ken Hanover, president and CEO of the Health Alliance of Greater Cincinnati, provided Bankston with additional management opportunities and an inside look into the C-Suite. While Bankston had never envisioned herself in management, let alone in an executive role, Hanover believed in her ability to lead others. “He coached me. He allowed me to lead large teams, and subsequently organizations, to a place of greatness. He supported my efforts as a nurse and as a health care executive.”

Bankston, who never lost her desire to teach others, incorporated that passion into her role as Chief Nurse Executive and Chief Executive Officer. “That became the way I managed. I was the teacher, the leader, and the coach.” By this time, she had discovered her strengths and weaknesses, and surrounded herself with individuals and team members who excelled in the areas where she struggled. “The more authority I was given, the more I believed my success was because of my willingness to be honest, transparent, and true to myself and the shared values of the team.”

While there has historically been a lack of diversity within the nursing profession, this issue is a challenge that Bankston continues to address today. She believes the first step in addressing this issue lies in exposing students of underrepresented populations to various nursing careers and the opportunities available within this field. “I work to prepare young people for higher education and I always emphasize the importance of being strong in math and science. I also advocate for community-oriented problem solving to assist engaging children of color in educational programs that will support them into the future.” In addition, Bankston recognizes that within today’s society, there are individuals who by no fault of their own, may have been negatively impacted by social and structural dysfunction, which creates barriers that do not allow these individuals to reach their full potential. “We need to identify these individuals, create inclusive environments, and provide a pathway for these students to be accepted into our programs.”

Dr. Bankston left us with this simple reminder – “Do not let anyone define your future. It may not be a straight and narrow path, but if you want it, there is generally a way to get it done. Often people will say you do not belong, you are not smart enough, or you will fail. Just ignore that. You can do what you have the desire and the will to do.”

Karen Bankston, Ph.D., M.S.N., FACHE, currently serves as associate dean for clinical practice, partnership and community engagement of the College of Nursing at the University of Cincinnati. She graduated with an AAS from Youngstown State University in 1976. A two-time alumna of Kent State College of Nursing, she received her BSN in 1984 and obtained her MSN in 1990. She received her Ph.D. in 2005 from the University of Cincinnati. Dr. Bankston is actively involved in numerous boards including the United Way of Greater Cincinnati, Interact for Health and Interact for Change, Legal Aid Society, The Children’s Home and the Urban League of Southwest Ohio. She is also involved in the Cincinnati USA Regional Chamber Agenda 360 and the Diversity and Inclusion Steering Committee. She has been awarded the American Nurses’ Association Mary Eliza Mahoney Award 2016, University of Cincinnati Distinguished Alumni Award 2016, and the Kent State University Professional Achievement Alumni Award 2016. Dr. Bankston is a member of Sigma Theta Tau, Delta XI, International Nursing Honor Society and the Cincinnati Alumnae Chapter of Delta Sigma Theta and a graduate of Leadership Cincinnati Class XXVII.