Live Chat
Cassandra Johnson, a senior nursing student from Boardman, OH, was recently offered a spot on the Cleveland Indians Entertainment Team for the 2017 season. 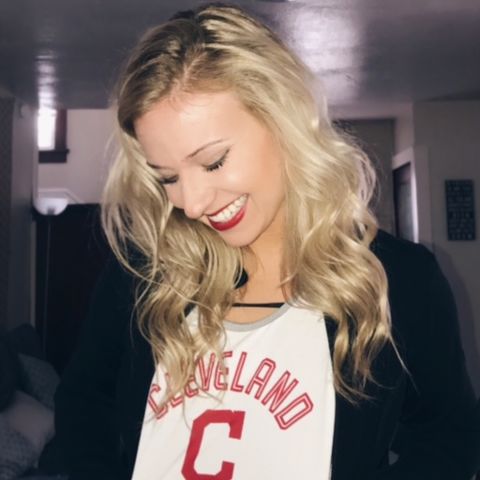 Cassandra Johnson, a senior nursing student from Boardman, OH, was recently offered a spot on the Cleveland Indians Entertainment Team for the 2017 season after a rigorous application process.  Of the 200 applicants, 65 were offered an audition and only 35 were selected this year.

Johnson, who has been dancing for 19 years, grew up being involved in many extra-curricular activities and organizations. "Throughout my time at Kent State University, I have been a part of the Kent State University Dance Team, Alpha Phi Fraternity, Students for Professional Nursing, Provost leaderships, and Sigma Theata Tau." In addition, she also managed to balance two hospital jobs as a nursing assistant/technician all while being a full-time student.

Discipline is the greatest lesson Johnson has learned from being a dancer. "I have learned how to take constructive criticism, recognize my priorities, and always do my best." She says that this is an important lesson she will carry with her into her nursing career where she will work with others to deliver compassionate and high levels of patient care.

As a student athlete and nursing student, Johnson learned utilized her time management skills well. "I stay on top of my studies by using every second I can to study between class, practices, and games," she said.

Although there are no other nurses in her family, Johnson chose nursing as her career path because of her interest in science and the lasting impression of the hospital nurses who had cared for family members. In addition, her parents, who are both pharmacists, greatly influenced her interest in healthcare. She made her decision to attend Kent State because of its excellence in nursing education and nationally known program.

As a graduating senior, she has the following advice for future nursing student athletes, "keep your mind on your goals and always try your hardest. It can be very stressful at times, but these are the experiences you will forever value."

After graduation she hopes to secure a nursing position within the ICU at the Cleveland Clinic. This would allow her to work full-time and dance for the Cleveland Indians on her days off. Johnson's dream job is to one day become a CRNA, as well as either assist in teaching and choreographing at a dance studio or own a dance studio of her own.