Alumna Reconnects to Passion of Nursing While Volunteering in Africa

Alumna Shannon Gardiner, BSN ’09, RN, CCRN, always knew she wanted to help people, but also longed for a career that would provide flexibility along the way. After a few years working in Akron Children’s Hospital’s pediatric ICU, followed by some time as a travel nurse, a Google search for volunteer opportunities led her to Mercy Ships, who own and operate the largest non-governmental hospital ship in the world. A native of Champion, Ohio, who now resides in Florida, Shannon returned home from her third volunteer experience aboard the Africa Mercy in April 2019, after spending three months in Guinea caring for pediatric critical care patients in the facial ward.

The patients immediately stole her heart. Many traveled great distances and required simple surgeries. Patients could be on the ship two weeks to a few months before transitioning to the Hope Center, an outpatient clinic located about a half mile from the ship in Guinea, where they stay until their incisions completely heal.

“These people have been ostracized by their deformity, so we do a lot of TLC,” said Shannon. “We treat them like human beings when they haven’t been treated that way for so long. We dress wounds, play games and socialize. It’s completely different than the care we provide back home.”

The hospital ship includes state-of-the-art facilities such as CT Scan, X-Ray and laboratory services. However, because the ship is docked in a country for ten months, they aren’t able to store blood. Volunteers who are on the ship for short periods of time serve as the walking blood bank. “If you’re able to donate, you sign a form. If a patient needs your blood type, you’ll get a call that it’s time for your donation,” said Shannon. “Blood goes directly to a patient in need versus not knowing where it goes in the States. The patients get so excited and often want a picture with the person whose blood they received.”

Onboard, Shannon worked eight-hour shifts in tight, windowless quarters. It was not uncommon for chaplain services or non-medical volunteers in the Befriend A Patient program to visit the ward to sing songs and play games with the patients. In the afternoons, an hour overlap with the next shift, called Deck 7 Time, allowed patients who were able to spend time outside.

“As nurses, we are taught to disconnect when we leave, even though that is difficult for many nurses because we care and that doesn’t stop at the door,” said Shannon. “On the ship, that’s not something you have to do. Yes, we follow HIPPA, but if you’re off and want to go down to the ward and see how a patient is doing, you go.” 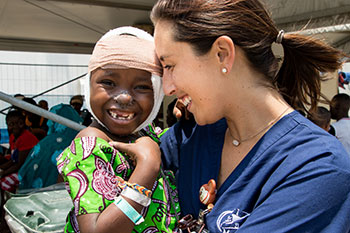 During this most recent trip, Shannon met seven-year-old Hannah, who suffered from Noma, an infectious disease that eats away at soft tissues. Noma is a result of malnourishment and lack of access to safe and effective healthcare. Hannah underwent significant plastic surgery to reconstruct her nose. “She had that childlike faith that the world is a good place. We fixed her nose and taught her the importance of brushing her teeth,” said Shannon. “When she got discharged, I went to her outpatient appointments. I saw her playing with the other kids the day I left and that was amazing.”

Shannon advises nurses interested in volunteering to do ample research about charities before committing. “Choose one that has a foot on the ground and is trying to empower people, not one just coming to fix the people.”

One of her favorite aspects of Mercy Ships is its dedication to helping the larger community through a program called Medical Capacity Building. Five years ago, when the Africa Mercy was last in Guinea, the volunteers trained a Guinean surgeon how to do cleft lip and cleft palate procedures. This time around, they saw minimal patients requiring that surgery. “Ultimately, Mercy Ships would like to not be needed. We want to train the local people to do things so well for their communities that the Africa Mercy doesn’t have to come back,” said Shannon, who has helped provide education and training to Guinean nurses and nursing students.

Her first experiences aboard the Africa Mercy in 2014 included two months in Madagascar and 10 weeks in Cameroon. “You never realize how small the world is. I met another nurse who was a Kent State alumna. It was interesting to travel all the way to Africa and meet someone who went to the same university as me,” said Shannon. “I’ve also worked alongside four nurses who worked at Akron Children's at one point.”

Volunteers from over 90 nations have served onboard the Africa Mercy. To support themselves financially while volunteering, they rely on donations. “For many of us, it’s an opportunity to get back to the Florence Nightingale vision of what nursing should be, caring for the patient as a whole,” said Shannon. “We’re a community coming together with the same heart. We joke it could be the perfect hospital system; the politics are put to the side and we’re here for whatever the patients need.”

While she does not have any trips planned at the moment, Shannon knows this won’t be the last time she volunteers. “Mercy Ships has given me the ability to bring three aspects of my life together; the ability to travel, volunteer and use my nursing skills. It’s such an honor to be part of this organization. It’s the reason I still enjoy doing critical care for kids,” said Shannon. “These trips are breaks from my everyday routine. As nurses, we can burnout easily, but this brings me back to the essence of why I became a nurse.”