Trekking to Mount Everest Base Camp has always been on my bucket list. Once I decided to look turning 60 years old straight in the eye, rather than ignore or hide from it, I booked a trek as a present to myself. After all, I wasn’t getting younger! This adventure would push my comfort zone because I had never attempted to take on a challenge this big. Would I have the endurance to hike 80 miles roundtrip, to an elevation of 18,000 feet?

Training began six months out. Luckily, I already hiked twice a week with a group in Ohio’s Cuyahoga Valley National Park, so I started carrying increasingly heavy weights in my backpack and pushed the group to hike every trail with steep uphill climbs. I couldn’t do much about the altitude, living at approximately 1,000 feet above sea level. In addition to hiking, I hit the gym and walked my dogs while wearing a weighted backpack, to which my neighbors gave me odd looks.

There were many anxieties to overcome on this trip. Was I too old? Was I fit enough? How would the altitude affect me? The highest I had previously hiked was 14,000 feet on the Inca Trail in Peru, and that was tough. And…I have two hip replacements! I chose to travel with Wild Women Expeditions, a Canadian-based, women-only, women-run, travel group. I have trekked with this group before, but never had I taken on a challenge this big! I met the seven women I would trek with in a closed Facebook group. Most of the women lived in the Canadian Rockies and were able to hike up to 10,000 feet or more, and yet, we shared similar anxieties and bonded quickly. There were many late-night conversations where one woman or another would ask, “What have I gotten myself into?”

The day finally arrived: it was time to leave! I flew alone from Cleveland to New York, through Qatar (an adventure in itself), to Kathmandu. More anxieties. Would I find the person sent to pick me up? As I exited the terminal I saw a man holding a sign with our group name. I pointed and gave a big smile. He ran forward, draped me in a gold Buddhist prayer shawl, and welcomed me to Nepal. I had arrived! At the hotel I met the other women I had been communicating with, along with Kopila, one of the few Nepalese female trekking guides.

Cloud cover was low on the morning we were to fly from Kathmandu to the village of Lukla, located at 9,500 feet in the Himalayas. Lukla has been called the world’s most dangerous airport with its short, single runway, a cliff on one end and the side of a mountain on the other, leaving no room for error. The runway angles down, so on takeoff, you are airborne, one way or another. All flights had been canceled, including our Twin Otter flight. Monsoon season had come early and we were at risk of not leaving in time to reach Mount Everest Base Camp and being back for our flights home. Rather than find an alternative climb, which would have been disappointing, we rented two helicopters and flew, in cloud cover, to Lukla! I sat in the co-pilot seat, what an experience!

The trek was difficult and physically exhausting, but at no time did I think I would not make it. Each step and turn of the trail brought stunning views. We maintained a slow and steady pace, stopping often for water, snacks (I packed a lot of power bars and peanut M&Ms), picture taking, and taking time to appreciate the local history and lore.

We always carried at least 2 liters of water and tried to drink 3 - 4 liters each day. The air at that altitude is very dry and you can’t feel yourself sweat. I chose to use a SteriPEN® to sterilize my water. Others bought bottled water in the villages we passed, however, there is no recycling and garbage and trash are a big problem on the trail. Water also came from big drums with a spigot, but the cleanliness of those barrels was in question. Each night I sterilized water to brush my teeth.

The women on this trip were amazingly supportive of each other. This was a team effort and we wanted everyone to make it to base camp. When one woman was sick on the trail from food or water, others took her pack and carried her extra water. Whenever there was a steep step up, someone stayed behind to give this old lady with titanium hips a hand. We learned about each other, shared our life disappointments and hopes, our strengths and weaknesses, and formed a close bond. People who met us on the trail thought we were longtime friends.

The Nepalese people we met were very friendly; many paused to slightly bow and say “Namaste” as we passed them on the trail. The trails we hiked are used for commerce between villages and by children hiking to school. There are no roads or motorized vehicles; all goods move by human porter or yak. There was a constant stream of yak trains on the trail, to the point of causing traffic jams on the narrow paths. Yaks have right of way and when you hear their bells, you scurry to find a safe space off the trail, preferably on the uphill side. The trail was filled with yak dung, making hiking delicate! We often saw women pick up large piles, bare-handed, and carry them home to use for cooking and heating! 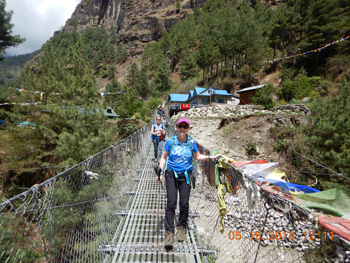 Our trek contained many suspension bridges. While crossing, I could hear the roar of the river below and saw the rushing water through the slats between planks. I admit, I had to hold on to our guide a few times as the bridges not only swayed side-to-side, but also up and down.

The range of food was very limited as everything had to be flown in by small plane or helicopter. While meat was available, we did not eat it because it had been transported unrefrigerated on the back of a porter or yak, often covered with flies. Nepalese believe garlic wards off altitude sickness; therefore, our food was smothered with garlic and each meal started with garlic soup. For safety, we chose foods that were cooked, so no salads. It was pretty much dal bhat (lentils and rice) every night. Meals were served on long tables, family style, so we had the opportunity to talk with trekkers from around the world. We were, though, the only all-female group! After dinner, we sat with the others drinking tea, playing cards, or just chatting.

Accommodations were rustic; no heat, insulation, water, or electricity. We slept in sleeping bags, wearing long johns, and cuddled our electronics to prevent battery loss in the cold. During the day, we charged up using solar rechargers.

At night, we could hear rats or other small critters scurrying around and, in the morning, we discovered some of our snacks had been nibbled. Shoes, head lamps, toilet paper, and hand sanitizer was kept by our beds for night trips to the squatty potty.

Toileting facilities in the Himalayas were an adventure! Most are very primitive. There were porcelain squatty potties that flushed by dipping a pail into a bucket of water and pouring it down the drain, and others that were holes in the ground you don’t flush, but cover with compost. Squatty potties took some getting used to! What direction do you face? Am I lined up correctly? (Hence a lot of wet pant legs!) And, where are the handholds so I don’t fall over? Remember, I am an old lady with hip issues! We carried toilet paper and hand sanitizer in our backpacks as those were rarely provided. It felt like heaven if our lodge had western toilets or if we didn’t have to go outdoors to use the facilities at night. Showers were rare, hot showers even less common! What a disappointment it was to reach a place with a hot shower only to discover the cloud cover meant no solar power to heat the water. We went about eight days without showering and felt very grungy.

Acute altitude sickness was one danger of hiking 17,500 feet to base camp. This area is considered “very high altitude,” where oxygen levels are much lower than sea level.  At 17,000 feet oxygen is at 11%. Our guide helped us prevent altitude sickness by encouraging us to drink 3 – 4 liters of water each day and to eat plenty of garlic (not sure evidenced based practice supports this!). We also ascended slowly and stopped for two days of acclimation at 12,000 and 15,000 feet. Each day when we got to our lodge, we dropped our gear, had tea, and then climbed even higher before descending back down to sleep for the night. The mantra at high altitude is “hike high, sleep low.” A pulse ox of 70% or less is an indication that someone needs to descend quickly. Luckily, we all stayed above that. The worst time I had with high altitude was the night we slept at 16,000 feet. We all had a restless night’s sleep, often waking up short of breath, with a panicky feeling. 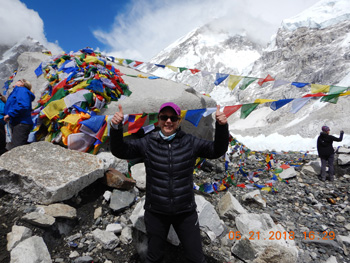 Marcy made it to Mount Everest Base Camp!

The mountains were stunning to behold. The first two days the sky was gray and we missed every opportunity to see Mount Everest. By the third day, the sun came out and the views of Everest and the other mountains were overpowering. We passed several memorials for those who had lost their lives attempting to summit Everest, a sobering reminder of the dangers of the mountains. Although we hiked as a group, there was a lot of time alone with our thoughts. I felt humbled to be in the presence of the tallest mountains on earth, a sight many people won’t get to see. I found inner strength to keep me going up steep inclines and thin air. I pushed my limits more than I have ever done in my previous 60 years. This trek taught me to not be afraid of setting high goals. If you are willing to work hard, almost anything is possible.

The sense of accomplishment upon reaching base camp after 8 days of hiking was exhilarating. We had to wait our turn to take pictures in front of the base camp sign and flags as it was overrun with trekkers. The camp was in the process of being dismantled as the summiting season was ending and we witnessed several expeditions coming down off the snowy mountain. Upon leaving base camp, we had 5 more days of trekking to get back to Lukla, and not all of it downhill. I felt a bit let down as we left base camp and the grandeur of the Everest behind; I had to remind myself to enjoy and savor the journey and not just the destination. 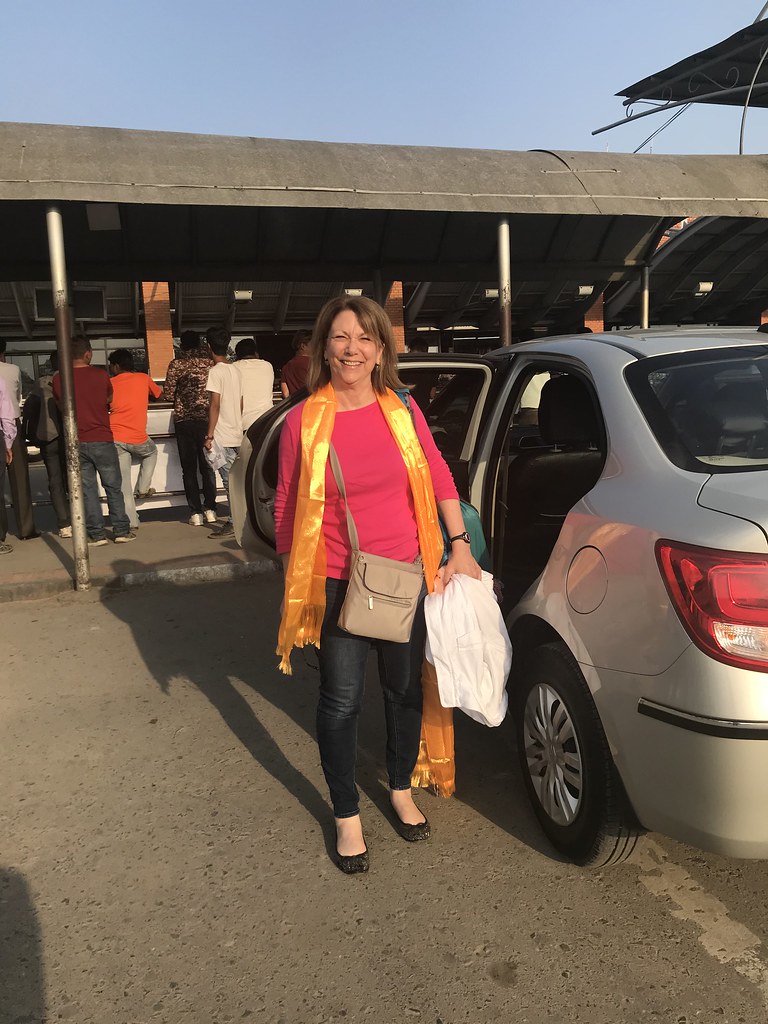