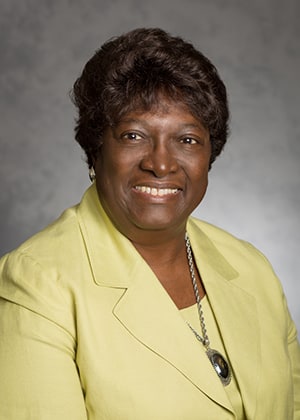 Gerry Radcliffe, BSN, MS, RN, is not an alumna of Kent State University College of Nursing, but that did not stop her from leaving her mark on Kent State nursing students. After receiving her BSN from Akron University, Radcliffe knew she needed more education. In 1979 she enrolled at the University of Akron for a joint master’s program with Kent State, however, when that program fell through, Radcliffe switched paths, transferring to Kent State’s College of Education, Health and Human Services. “I was working as a nursing director at the time, and I was interested in patient satisfaction so I chose to do my master’s in Community Health Education.”

As luck would have it, Radcliffe’s friend from Massillon City Hospital School of Nursing, Davina Gosnell, was the Director of the Nursing of the Adult program at Kent State College of Nursing, and she sought out Radcliffe’s assistance. “She asked me if I would work on one of her committees to help improve the retention of the African American students within the college. Numerous students would start the program, but many would drop out.” Radcliffe could directly relate to what the students were facing as minority nursing students, and she hoped the students could learn from her similar experiences.

Radcliffe began meeting regularly with a group of 10 students for study sessions and to encourage them to stick to their goals. “I explained they would have to make some sacrifices if they wanted to become a registered nurse. They had to realize they were not going to be able to have the same social life as their friends who were not also nursing students, and still complete their nursing degree.” During these meetings, the students felt comfortable sharing their struggles and issues with Radcliffe. “Some felt the faculty treated them differently than the other students. The nation had recently gone through the Civil Rights Movement and I knew first-hand the issues they were facing.” Radcliffe took that opportunity to share her own story with the students. “I was one of 33 students in my nursing class at Massillon City Hospital School of Nursing. I was given the single room and told I would feel more comfortable being by myself. I heard the rumors that some of the faculty thought I would not last anyway. Three years later, only 11 students from the original class graduated and I was one of them! It was difficult getting through nursing school, but I was willing to do the hard work.”

Throughout the two years of her master’s program, Radcliffe attentively worked with the nursing students. “Their reactions to my encouragement were mixed. Some understood I was trying to offer them support, others had given up on their dreams and quit the program.” Although some students changed majors, the college experienced a longer retention rate as a result of Radcliffe’s dedication to the program. “One thing I always told the students was it’s okay to take a break, but you need to come back if being a nurse is what you truly want to do.”