Kent State University’s College of Nursing was one of several university departments to purchase a Centennial Black Squirrel in 2010. The College of Nursing began promoting the squirrel’s sense of style when it launched its social media campaign in October 2012.Deborah Gesaman, receptionist at the College of Nursing and creative mind and fashion designer of the black squirrel’s outfits, says the outfits are either themed to go along with specific holidays or are based on the current season. 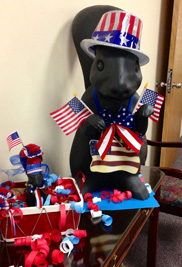 “Our squirrel loves holidays, so nearly every holiday, he rocks a new look,” says Kathleen Donchess, marketing coordinator for the College of Nursing. “We also observe Opening Day for the Indians.”

Donchess says students often comment on the squirrel when they stop in the dean’s office.  The squirrel’s latest fashion was in celebration of the Fourth of July.

“The squirrel has gotten great responses,” says Donchess. “It’s one of those unexpected things that makes people smile and that’s always a good thing.”

Gesaman has created outfits for all of the holidays, but her favorite is the pilgrim outfit for Thanksgiving. For the next outfit, Gesaman would like to find a bathing suit, and build the outfit around a day at the pool or beach. One day, she would even like to create a maintenance man outfit.

“If there is ever a period when the squirrel isn’t dressed up, I hear about it,” says Gesaman. “I’d love to see the students and faculty come up with some great costume ideas. The thing I like most about dressing the squirrel up is that it gives me a chance to use my imagination. For example, what materials do we have around the office that can be used, cut or folded? Sometimes I even pull out a needle and thread to create an outfit.”

“If something can be made out of felt or paper, she can do it,” says Donchess. “She’s amazing.”

The College of Nursing is located at Henderson Hall on the Kent Campus.

To check out the College of Nursing’s Pinterest Board, with photos of the black squirrel in a variety of costumes, visit http://pinterest.com/kentnursing/black-squirrel-decked-out.

Do you have a photo of your department’s Centennial Squirrel in costume? Send your photos to einside@kent.edu.