Kent State University’s College of Nursing will host its second “Race into Finals” 5K race and one-mile fun run/walk on April 27 to raise money for the college’s Student Emergency Fund. 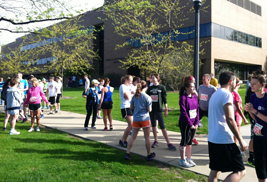 The races will take place from 8-11 a.m. and begin and end at Henderson Hall. The 5K will be timed, leading participants through the Kent State University Esplanade and back around campus. The fun run will be more family oriented on a shorter course and open to children, adults and seniors.

“It’s for those nursing students who suddenly become in dire need of emergency financial funding, such as books or rent,” says Tezie. “Instead of them having to go without or to find a loan, we’re able to help them.”

Tezie says there will be tents, such as the College of Podiatric Medicine, to hand out information to participants and family fans. She says there also will be snacks and a water stand available for runners.

“We’re hoping to draw in students, but we’ll have anyone from faculty, staff, alumni and Kent community members there,” says Tezie. “We’re really trying to open it up to the community of Kent as well as Kent State.”

Tezie says that the college hopes to expand in future years, and is exploring the idea of also doing a scavenger hunt race next year.

“We hope this is something we can really engage the community at large with,” says Tezie. “We want to convey wellness, fitness and community, but with a sense of fun and something that can benefit our students.”

For more information and to register, visit https://nursing.kent.edu/shop/events/race-into-finals.

Photo caption:
Participants in last year's “Race into Finals" 5K race and one-mile fun run/walk gather outside Henderson Hall for the start of the race.