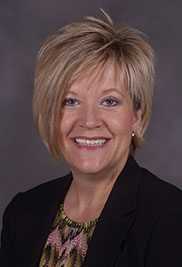 “I am honored to be selected for this award,” says Smith. “One of the most significant acknowledgments of our work is to receive recognition from our colleagues.”

The Ohio Nurses Association calls for award nominations every two years, and Smith was nominated by colleagues in her district. The nominee must demonstrate commitment to achieving nursing goals through involvement in political activity and the ability to involve peers in political action, educate other nurses about the role of politics in nursing, promote nurses serving in elected and appointed offices, demonstrate professional qualities in nursing and be an active member of the Health Policy Council or an Ohio Nurses Association legislative liaison program.

To fulfill the criteria, Smith serves on the Nurses Day at the statehouse planning committee and served a five-year term on the Ohio Board of Nursing. At Kent State, she teaches health policy to graduate-level nursing students and a second online health policy course for RN/B.S.N. students. Smith also is a guest speaker in other local nursing programs, including Malone University’s College of Nursing.

“This award provides recognition for the work I have done and demonstrates to my students that I practice what I teach,” says Smith.