Two Kent State University College of Nursing students recently received scholarships at the Nurses Choice Awards and Scholarship Luncheon, held at the Blackwell Hotel and Conference Center in Columbus, Ohio. Sponsored by the Ohio Nurses Foundation, the annual fundraiser awards notable nurses and future nurses with grants and scholarships.   Interestingly, both of the honored Kent State nursing students have family members who also chose healthcare as a profession.

“I first became interested in a nursing career after seeing the wonderful care my own family members received while in the hospital,” said Ashlee Schirripa of Seven Hills, Ohio. She is a first-time recipient of the Summit and Portage District Scholarship of $1,000. “The scholarship will help me with the cost of books and tuition.” 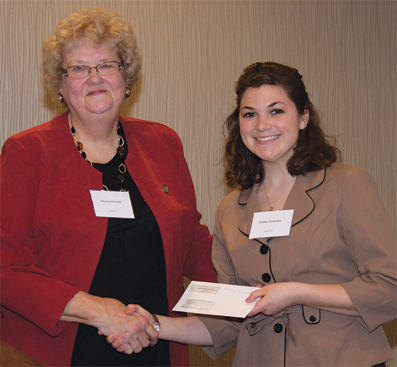 Ashlee’s older sister, Sara, is a senior in the nursing program at Kent State and is a previous recipient of the same scholarship.

To compete for the scholarship Schirripa had to have a high GPA, be in good standing with a college of nursing, write an essay on why she chose nursing as a career, attend a school in Portage or Summit County and submit a transcript. As a sophomore in Kent State’s Bachelor of Science in Nursing (B.S.N.) program, Schirripa said she would like to work as an emergency or trauma nurse upon graduation.

Megan Brawley of Cleveland, also comes from a family that includes healthcare professionals. Her father is a physician and her mother and sister are both nurses. But Brawley didn’t start out in nursing, she chose to go into banking. It wasn’t long, however, before she realized it wasn’t where she was meant to be.   “I just knew banking wasn’t something I could be passionate about long-term.” Brawley said. “I wanted to help people get well and to prevent illness, something I could believe in.” 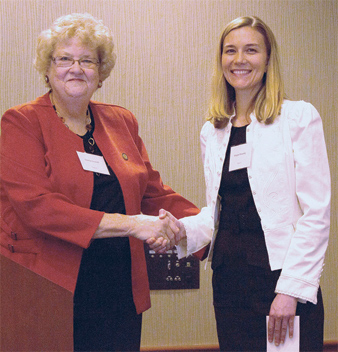 Brawley is a two-time recipient of the Ohio Nurses Foundation Students Returning to School to Major in Nursing Scholarship. As a busy, non-traditional student working full-time and going to school full-time, the $1,000 scholarship has helped her off-set the cost of tuition and lessened the need for student loans.   “The selection criteria included college academic records and transcripts, school activities, awards and community service and a personal statement on how I would advance nursing in Ohio,” Brawley said.

After graduation this December, Brawley plans to work in obstetrics, labor and delivery or women's health while completing a Master of Science in Nursing (M.S.N.) degree from Kent State.

The Ohio Nurses Foundation is the philanthropic arm of the Ohio Nurses Association, a 501(c)(3) charity founded in 2002. Since its inception, the foundation has awarded more than $100,000 in scholarships and grants to Ohio students and nurse researchers.

In existence for nearly 50 years, Kent State’s College of Nursing is one of the largest and most comprehensive nursing programs in the nation. As part of Kent State’s eight-campus system, the college provides more than 2,000 nursing students courses of study at the baccalaureate, master's and doctoral levels. To learn more about nursing programs at Kent State, visit www.kent.edu/nursing.