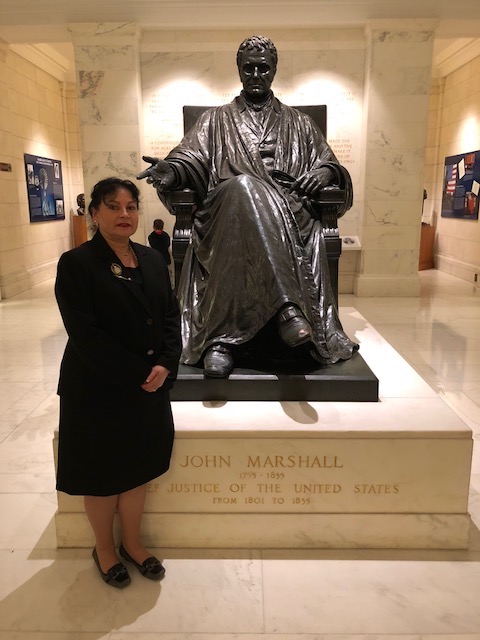 College of Nursing faculty member, Kimberly Cleveland, JD, MSN, RN, C-MBC, lecturer, uses her combined passion for nursing and law to inspire students to be more aware of and involved in healthcare policy and the community. Cleveland was recently admitted to the Bar of the United States Supreme Court (pictured left), an opportunity that affords her the privilege of presenting a matter to the highest court in the land. “Being able to champion matters such as the healthcare reform, the opioid crisis or complementary and alternative medicines before the Supreme Court if need be, is such a big honor for me.” Cleveland received her adult nurse practitioner post-graduate certificate from Kent State in 1998 and graduated from Cleveland Marshall College of Law in 2003.  Her involvement in ICU nursing administration, the cardiac open-heart unit, and the responsibility of opening the first long-term care hospital in Ohio, helped to catapult her into becoming the lawyer she is today. “It was in those experiences where I became familiar with lawyers, administrative law and testifying before congress. Being able to advocate for the sickest of patients was so rewarding.”

As a nurse attorney, Cleveland’s work varies from day to day. “I can work with families who are broken, nurses who have licensure or malpractice issues, and assist nurse practitioners in setting up new businesses or contracts.” Cleveland also works diligently with communities, schools and churches. “We are very close to Perry, OH, where a number of kids have committed teen suicide. Nurses in the schools are trying to figure out the value of predictive screening tools. Parents and students are grieving. There are questions of how and why this happened and if anyone is liable. All of that is an interface between nursing and law.”

In January 2017, she was asked to sit on the Cleveland Metropolitan School District Friends of Martin Luther King, Jr. Career Campus Advisory Board. As a Pro Bono volunteer, Cleveland aids the school in making connections within the community so that its students are better prepared for careers in policing, firefighting, therapy, dentistry, law and nursing. Cleveland has helped the school identify potential financial resources to support the efforts of the school’s administration. Additionally, Cleveland initiated a relationship between Martin Luther King, Jr. Career Campus and Kent State University (KSU). She, along with a team from KSU, provided guidance to more than 100 high school senior students who were conducting research and writing their capstone projects.

Last summer, Cleveland also organized a special day for the seniors to visit Kent State. For many of the students, it was their first visit to Kent. The students spent time talking with research leaders within their specialty and concentration areas, toured the campus and had their college questions answered by university leaders (pictured below). “Four students applied to Kent State after their visit,” Cleveland said. “The university probably would not have been on their radar had they not had the opportunity to personally experience all the campus has to offer.” It is evident Cleveland could not be prouder of the students at Martin Luther King, Jr. Career Campus. “Working with these students has been one of the biggest highlights of my career. For a little more than a year, I have watched them mature. Each has grown in their presentation skills and professional comportment. Their ability to research and ask detailed questions has evolved wonderfully.” 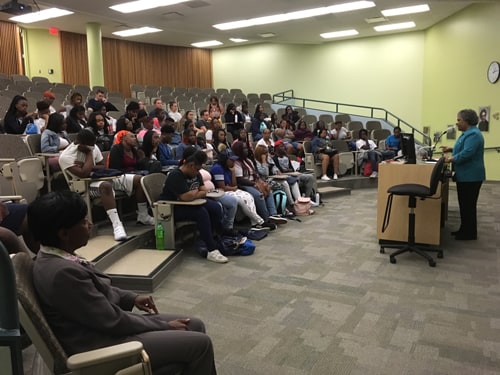 When she is not serving as a nurse attorney or working with the students at Martin Luther King, Jr. Career Campus, Cleveland dedicates her time preparing the next generation of nurses to become political healthcare advocates. As the healthcare policy coordinator for the College of Nursing, Cleveland has noticed disconnect between how students are taught to be involved in policy issues and coursework. “When I was an undergraduate student, just reading a book didn’t make me excited. That by itself wasn’t enough to get me jazzed about policy. I knew there had to be a different way to get the nursing students enthusiastic.” Through conversations with her students and others at the university, Cleveland learned there were no opportunities for nursing students to engage in a structured public debate about issues that might be of interest to them.

A collaboration with the Kent State Undergraduate Student Government and the Kent State Speech and Debate team led to the creation of the College of Nursing’s first healthcare policy debate in fall 2017. The students participating on the debate teams selected Ohio’s Issue 2 for lower prescription drug prices as the event’s topic and each team was coached by Cleveland. In preparing for the debate, students had the opportunity to learn the importance of research and preparation. “In healthcare policy, students do a lot of research and they do not understand or appreciate why that is until they watch the process unfold. The debate also showed students how important their right to free speech is because not everyone agrees,” said Cleveland. “Freedom of Speech is a very sacred thing; you cannot shut someone down just because they disagree with you. We can solve any problem with polite exchange, but there needs to be respect to make that happen, and our student body who have been at these debates have been wonderful.”

In the spring, the college hosted its second healthcare policy debate, which according to Cleveland, was equally as exciting as the first. “The students picked the topic of the role of the government in the opioid crisis. They really understood where we seem to be missing pieces in our healthcare delivery system in connecting affected individuals with the resources they and their families need. Watching the students’ passion as a result of what they had researched and learned was wonderful.” In addition to the nursing students in the audience, members of the community attended the spring debate and participated in the open discussion sections. “We had some wonderful questions from the audience and I think that brought out the complexity of the issues within the opioid crisis.”

With one full year of successful debates held, Cleveland remarked that the debates are still in a state of development. “The third debate is being planned for fall 2018, and the student debaters from spring have agreed to coach the new teams.” Cleveland hopes to see the debate engage students and faculty at every Kent State campus and in other colleges. “The most important gift we have as a Kent State family is that we have so many experts across all of our campuses.”

Following the debates, five nursing students, three undergraduates and two at the graduate level, have expressed an interest in following in Cleveland’s nursing and legal footsteps. “When a student comes to you and says ‘this is something I have never thought of before, but I think I want to do it,’ it makes you feel really great.” For those students and practicing nurses who are not interested in becoming a nurse attorney, Cleveland would like to encourage them to find other ways to join the political conversations about healthcare. “Write a letter, visit your congressman, participate in Nurses’ Day at the Statehouse, or become involved with a professional nursing organization. All of those are things that can be done without a law degree and allows nurses to have a voice.” If her students remember one thing from class, Cleveland hopes they never forget their voices as nurses are unique. “We see the complexity of the way things come together, know what all of our assessments have collectively taught us, and are in a great place to be able to influence the political arena with what we know.”