While many of their peers took the summer off from studying, twelve nursing students embraced the opportunity to visit new countries and learn alongside international experts, all while earning academic credit. In May, five nursing students traveled to Londonderry, Northern Ireland, for two weeks, while seven nursing students spent the month of June in Florence, Italy. 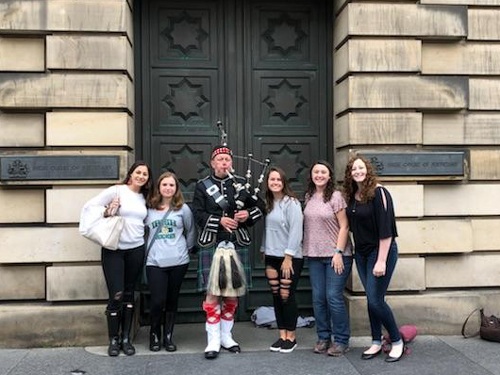 Students pose with a bagpiper in Edinburgh, Scotland.

Northern Ireland provided a backdrop for students to examine the cultural, political, and economic forces that influence health care, nursing needs and health disparities within the United Kingdom. Kent nursing students attended classes at the University of Ulster, Magee Campus, alongside third year nursing students and attended special guest lectures and gained valuable clinical experience at Altnagelvin Hospital in Derry, Northern Ireland. At the hospital, each student was placed on a different unit, such as the renal dialysis ward or orthopedic trauma, and paired with a registered nurse. They observed everyday nursing practices such as medication administration, assessment and documentation. “This opportunity allowed us to exercise our passion in nursing and expand our horizons to the global community by discovering the differences between our healthcare system and hospitals with those in the United Kingdom,” said nursing graduate student, Breanna Bucco.

At the conclusion of their two weeks, the nursing students presented their findings on the differences between Northern Ireland and United States healthcare to university and hospital representatives. “Our observations and findings promoted a world view and challenged us to consider other methods of thinking and nursing,” said Bucco.

In addition to attending class and clinicals, the students enjoyed exploring Northern Ireland and the surrounding countries. Their sightseeing adventures included a visit to Northern Ireland’s capital, Belfast, posing for a photo with a bagpiper in Edinburgh, Scotland, touring the Scottish Highlands and a Loch Ness boat ride in search of Nessie the Loch Ness monster. “Studying abroad provided an amazing experience to be immersed in another culture,” said Bucco.

A few countries away, students pursuing careers in nursing, public health, and other related fields, prepared to study the impacts of their field through an international lens at The Florence Health Institute. 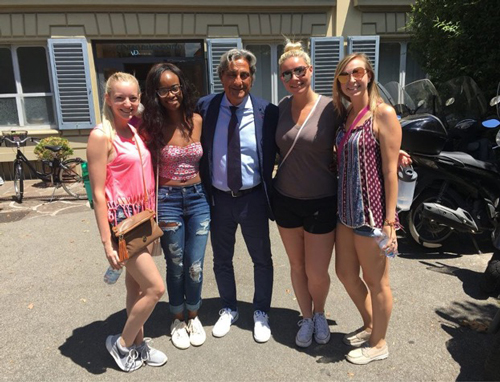 Over the course of the month, the students visited many health-related destinations throughout the city. Following tours of Poggibonsi Public Hospital and the Villa Donatello Private Clinic, the students were treated to guest lectures by physicians, one of whom used to work at John Hopkins University in the U.S. before returning to Italy. The speakers compared Italian and United States hospitals and health care system, in addition to explaining how care was delivered and paid for in Italy’s public and private hospitals. “We found the physicians first-hand experience with both healthcare systems to be extremely valuable,” said senior nursing student, Izzy Scarl.

Building upon early class discussions of pathogens that caused the bubonic plague and other diseases, the students attended guest lectures at the University of Siena which focused on the importance of immunizations. “It was brought to our attention that infectious disease is still a huge problem around the world due to financial struggles of developing nations,” said sophomore nursing student, Allie Rodriguez. “There are many critics in the world who question whether or not immunizations help the human race, but the doctors of this intensive institute provided several groundbreaking statistics to show just how successful vaccines have been over time.”

A month living and studying in Florence, Italy, was exciting enough on its own, but according to Pamela Stephenson, Ph.D., RN., it was studying with students from other disciplines that provided the new twist nursing students were exposed to in the classroom.

“We used a lot of interactive and unfolding case studies dealing with small and large issues so students could see first-hand what their team members bring to the table,” said Dr. Stephenson. “Many students have since expressed their new appreciation for the importance of a team approach in healthcare.”

The Florence Health Institute class met Mondays through Thursdays, which allowed students to explore Italy and the surrounding countries during their weekly three-day weekends. Popular destinations included the Amalfi Coast, a stretch of coastline along the southern edge of Italy’s Sorrentine Peninsula; Mount Vesuvius, an active volcano; the ruins of Pompeii, a Roman city buried under ash and pumice following a devastating eruption in 79 A.D.; and the Krka National Park waterfalls in southern Croatia. “We stepped far out of our comfort zones and discovered so much about ourselves and the cultures around us,” said junior biology student Jess Jubec. “Studying abroad gave us an amazing opportunity that we may otherwise never have experienced.”