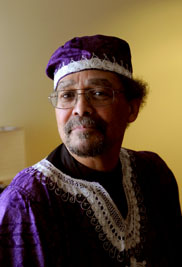 Francis Dorsey, Ph.D., associate professor in the Department of Pan-African Studies at Kent State University, has been named president of the Alpha Kappa Mu Honor Society.

He was elected into the position during the 61st National Convention of Alpha Kappa Mu Honor Society at Lincoln University in April 2011. His term as president began in 2012.

Dorsey, from Willow Grove, Pa., explains that he is honored to take the position as president because of his deep involvement with the organization.

“I never expected in any way that I would be in this position,” Dorsey says. “It is an honor that my peers nominated and voted in my favor.”

Dorsey petitioned for Kent State’s chapter in 1980. The Mu Mu Chapter was founded the next year in 1981.
Alpha Kappa Mu Society is open to junior and senior men and women who are devoted to promoting a high level of scholarship, encouraging endeavors in all areas of knowledge, cultivating a high level of living and appreciating scholarship and scholastic endeavors.

“This organization allows students to learn valuable information and encourages students to give back to their communities,” Dorsey says.

Dorsey accepted the position as the organization celebrates its 75th anniversary.

“As our nation forges ahead and we prepare for our 75th anniversary as an organization, there is a need to recognize that we must be contributing citizens to help make this a better nation and reawaken and redirect young minds as we contribute to preserving the efficacy of the ideals and principles of Alpha Kappa Mu,” Dorsey says.