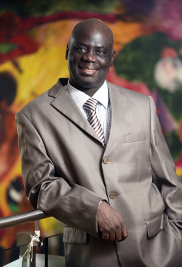 At Kent State, Mendy will give lectures, observe classes and conduct library research. One of Mendy’s specializations is American Literature, therefore, the Department of Pan-African Studies is working closely with the Department of English to ensure that a maximum number of students hear him lecture.

“The Fulbright Scholarship allows for exchange between scholars so that they can act as cultural ambassadors and learn from each other,” Mendy says. “It was a really long process and there were a lot of applicants. It’s an honor to have been sent to Kent State.”

Senegal is one of the most stable democracies in Africa, with a long Atlantic coast in the west and northern borders with Mauritania. It also hosts the West African headquarters for Mobil Oil, Arthur Anderson and other international American firms. The Department of Pan-African Studies is steadily building international bridges and global partnerships as it works toward achieving strategic goals, such as continuing to develop cooperative arrangements with other academic departments locally, nationally and internationally.

Diversity is one of Kent State President Lester A. Lefton’s key commitments for Kent State, and the Fulbright Scholarship program helps advance this goal.

“Here we have an international scholar who has just been honored with this prestigious and highly sought-after fellowship that’s coming from another continent to North America,” says Amoaba Gooden, interim chair and associate professor in the Department of Pan-African Studies. “That in itself is an honor for Kent State and it really fits in with the global mission of internationalizing the university. Dr. Mendy is an expert in American literature and human rights issues, so I think he’s going to bring a lot to Kent State.”

The Fulbright Scholar Program was proposed by Sen. J. William Fulbright of Arkansas in 1946 to promote mutual understanding between U.S. citizens and people of other countries.