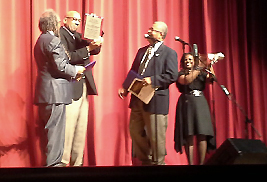 Kent State University adjunct professor and alumnus Willard Jenkins has received the Jazz Journalists Association’s (JJA) 2013 Lifetime Achievement Award in Jazz Journalism. Jenkins received the award in June. Jenkins graduated from Kent State in 1973 and has taught the course Jazz Imagines Africa in the Department of Pan-African Studies since 2005. Jenkins also has served as artistic director for the Tri-C JazzFest in Cleveland since 1995.

“It felt great to receive the JJA Lifetime Achievement Award, particularly because it’s an award voted on by peers, and I accepted the award from the distinguished poet, playwright, author and jazz writer Amiri Baraka,” says Jenkins.

Jenkins created his blog, “The Independent Ear,” has several publications and collaborated with National Endowment for the Arts Jazz Master Randy Weston on the autobiography African Rhythms, which was published by the Duke University Press.

Along with teaching at Kent State, Jenkins formerly taught Jazz History at Cleveland State University. Jenkins says he enjoys teaching Jazz Imagines Africa at Kent State because it gives him the opportunity to introduce jazz and jazz-related music to his students for the first time.

“It never ceases to amaze me that despite the fact that jazz is truly American classical music and getting down to its roots —black classical music, I constantly have students who remark that this course was their first-ever exposure to this wonderful world of music,” says Jenkins.

Jenkins has been a jazz journalist since 1969, when he started writing record reviews for the black student newspaper, The Black Watch, at Kent State.

Tim Moore, professor emeritus of Pan-African Studies at Kent State, was a student and witness to Jenkins’ involvement during his time at Kent State.

“It has been especially rewarding to see that he stayed true to his love of music, which has led him to a self-made, multifaceted career that has now earned him both national and international recognition and appreciation by his peers,” says Moore.

For more information about Jenkins and to read his blog “The Independent Ear,” visit www.openskyjazz.com.