Professor Serves as an Inspiration to Students 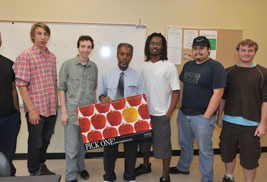 Teachers have the ability to shape students with the knowledge they pass down. And many students are grateful for that knowledge as they grow academically and professionally. Professor George Garrison of the Department of Pan-African Studies at Kent State University is one of those teachers who have inspired and helped many students throughout their college careers and beyond. To honor his accomplishments in teaching, Garrison received one of the three 2011 Distinguished Teaching Awards (DTA).

The Distinguished Teaching Award, sponsored by the Alumni Association, recognizes extraordinary teaching in the classroom and impact on students’ lives. The DTA committee selected 10 faculty finalists from 562 nominations.

Numerous students nominated Garrison for his excellence at Kent State.

"When I took Black Experience II, I thought that it would be just another LER," says Joslyn Allen, junior fashion design student. "I was wrong. He didn’t just teach the class, he told the actual story of Black History. It was remarkable."

Another student also could not say enough about Garrison. "[Garrison] grew up with a thirst for knowledge," says Devin McCallion, senior electronic media production and video major. "He demands the same out of his students. It’s refreshing, and I hope to take another course."

Garrison is teaching both Black Experience I and II this spring, as well as Black Social and Political Thought, and Malcolm and Martin.

"I love teaching at Kent State because of its history, location, diversity and the freedom one has to share his or her expertise with motivated students," Garrison says.