Diversity in Our Department

We are proud of the several statistical measures (detailed below) that illustrate how our department offers a welcoming and nurturing environment for both women and minorities.

Out of a total of 25 tenured/tenure-track  physics faculty members on the Kent campus, we have six women professors (all tenured) — an exceptional level of representation.

While the graph below (the latest as of 2013 from the Statistical Research Center of the American Institute of Physics) illustrates that about 12% of US PhD-granting physics departments (20 institutions) have five or more women on their faculty, all of these 20 departments are larger than ours, and in fact, the great majority are several times larger. 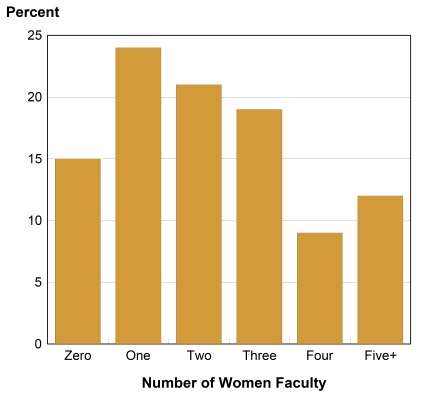 Furthermore, ours is one of only ten physics departments in the United States where AIP reports that 25% or more of the PhD recipients during a recent survey period were women.

Since 1973, the National Science Foundation has tracked the production of African-American Physics PhD graduates. Based on NSF's data up through 1999, our department's track record has made us a national leader in this ranking. In 2009, updated data were released, extending the surveyed period up through 2004 — see the table below, which is part of a comprehensive report (.pdf file) released by the American Institute of Physics. 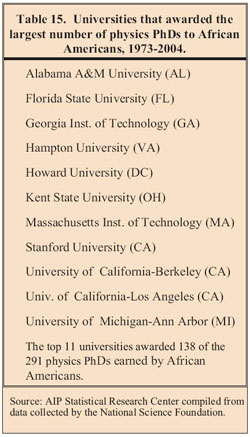 The new data place Kent State in the top six departments nationwide, in a ranking of total graduates, i.e., the ranking is not corrected for the very different total number of faculty and students in each department. Two of the five departments ahead of us (Florida State & Georgia Tech) are 2.5 times larger on average, and so would be expected to have 2.5 times as many graduates in all categories. The other three ahead of us are Historically Black institutions. Thus, among universities with 30 physics faculty or less, and excluding HBCUs, we are the top university in the US for mentoring of African-American PhD Physics graduates.