Kent State physics professors Declan Keane and Spiros Margetis are the principal investigators of the project funded by the U.S. Department of Energy which led to the discovery of antihelium-4, the most massive antinucleus known to date.

Kent State University researchers are part of a team of international scientists who have discovered antihelium-4, the most massive antinucleus known to date. This new discovery is the antimatter partner of the helium-4 nucleus, also called the alpha particle. Helium-4 is the normal form of helium, the second most abundant element in the universe after hydrogen. 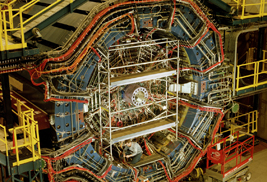 Kent State physics professors Declan Keane and Spiros Margetis are the principal investigators of the project funded by the U.S. Department of Energy, of which a major goal was the pursuit of this research. The peer-reviewed findings were published online April 24 by the journal Nature, the world's most highly-cited interdisciplinary science journal.

The author contact on behalf of the full international team is Brookhaven scientist Aihong Tang, who received his doctoral degree from Kent State in 2002. The findings were presented outside the STAR collaboration for the first time in a colloquium by Tang at Brookhaven on April 19. The first presentation at a conference was by Keane at a meeting sponsored by the American Physical Society in Anaheim, Calif., on April 27.

The new antihelium-4 is a negatively charged state of antimatter containing two antiprotons and two antineutrons. Unlike the antinucleus discovered in 2010, this one does not undergo radioactive decay.

“The last stable antinucleus discovery was at a Russian accelerator in 1971. To break the new record established by the present discovery, a future experiment would need to find an antinucleus containing six antiparticles, and if this were produced by the same mechanism, it would be rarer by a factor of 2.6 million,” Keane says. “This huge factor puts that milestone out of reach of any accelerator-based experiment for the foreseeable future.”

Collisions at RHIC fleetingly produce conditions that existed a few microseconds after the Big Bang, which gave birth to the universe some 13.7 billion years ago. “Our understanding is that matter and antimatter were initially created with equal abundance immediately following the Big Bang,” Tang says. “The predominance of matter in the visible universe today remains a major unsolved scientific mystery.”

The STAR collaboration is composed of 54 institutions from 12 countries. Research at RHIC is funded primarily by the U.S. Department of Energy’s Office of Science and by various governmental agencies of the countries of the collaborating institutions.

One of 10 national laboratories overseen and primarily funded by the U.S. Department of Energy, Brookhaven National Laboratory conducts research in the physical, biomedical and environmental sciences, as well as in energy technologies and national security. Brookhaven Lab also builds and operates major scientific facilities available to university, industry and government researchers.

For more information about the Department of Physics at Kent State, visit www.kent.edu/physics.