Ten Kent State University researchers are part of a team of international scientists who have discovered the most massive antinucleus discovered to date.

Ten Kent State University researchers are part of a team of international scientists who have discovered the most massive antinucleus discovered to date. They are part of an international team of scientists studying high-energy collision of gold ions at the Relativistic Heavy Ion Collider (RHIC), a 2.4 mile-circumference particle accelerator at Brookhaven National Laboratory in Upton, N.Y., operated by the U.S. Department of Energy. 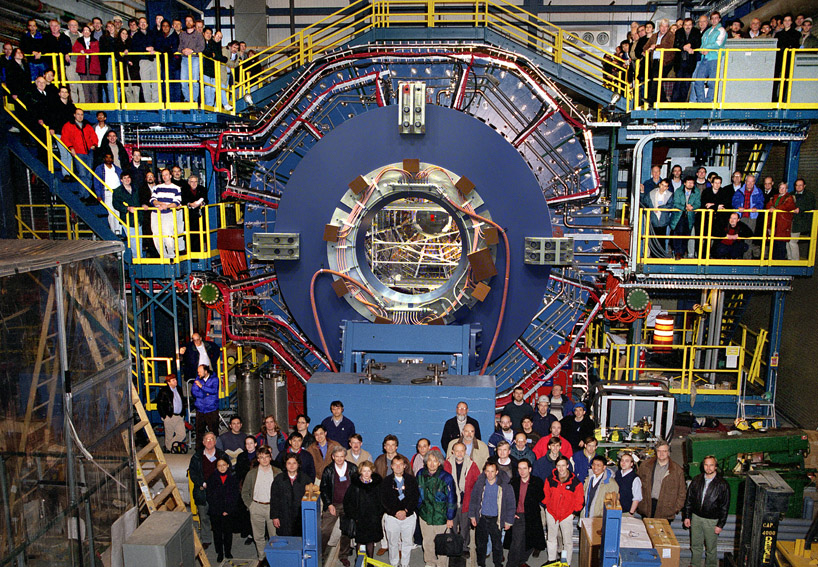 The STAR detector specializes in tracking the thousands of particles produced by each nucleus-nucleus collision at RHIC. Weighing 1,200 tons and as large as a house, STAR is a massive detector. It is used to search for signatures of the form of matter that RHIC was designed to create.

Kent State physics professor Declan Keane and his postdoctoral researcher Jinhui Chen are lead authors of the new paper outlining the new discoveries. The findings will be published online by the journal Science at the Science Express Web site today - Science and Science Express are published by the American Association for the Advancement of Science, the world's largest general scientific organization.

The search for antimatter in STAR and the study of its properties was begun by Chen in the fall of 2008, under the supervision of Keane.

"Jinhui Chen spent many months at Brookhaven glued to his computer and studying the data," said Keane, "While the findings being released this week are the work of hundreds of scientists, this discovery would not have happened without Chen's diligent research. Chen not only found the first antinucleus of this type, he actually found 70 examples of the new particle which is all the more significant," Keane said.

Dr. Chen's research was supported by a grant from the U.S. Department of Energy. Keane and Kent State professor Spiros Margetis were principal investigators for the research. Dr. Chen recently accepted a tenured assistant scientist position at the Shanghai Institute of Applied Physics, a unit of the Chinese Academy of Sciences. "Chinese institutes are very quick off the mark when it comes to recruiting top scientific talent," Keane explained.

Since 2000, other teams have looked for exotic antimatter using the STAR detector but there were limitations regarding data collection and the capability of the device. In the fall of 2008, it seemed like the time was right to begin to search again, Keane said. RHIC's STAR collaboration is now poised to resume antimatter studies with greatly enhanced capabilities. The scientists expect to increase their data by about a factor of 10 in the next few years.

Collisions at RHIC fleetingly produce conditions that existed a few microseconds after the Big Bang, which scientists believe gave birth to the universe as we know it some 13.7 billion years ago.

"This discovery is significant because it plays a role in one of the fundamental puzzles of physics," said Bryon Anderson, professor and chair of the physics department at Kent State and a contributor to the research. There is no definitive explanation for the asymmetries between matter and antimatter in our universe, and this research opens the door to further exploration of this area.

Brookhaven physicist Zhangbu Xu, another one of the lead authors, agrees this research paves the way for a new frontier of physics. "A solution to this major unsolved problem will require measurements of subtle deviations from perfect symmetry between matter and antimatter, and there are good prospects for future antimatter measurements at RHIC to address this key issue," Xu said.

"This experimental discovery may have unprecedented consequences for our view of the world," said theoretical physicist Horst Stoecker, vice president of the Helmholtz Association of German National Laboratories. "This antimatter pushes open the door to new dimensions in the nuclear chart - an idea that just a few years ago would have been viewed as impossible."

The work reported in Science also has implications for cosmic ray experiments searching for new physics such as dark matter, which is thought to be responsible for about a quarter of the mass of the universe.

Several other members of the Kent State physics department are co-authors of the new paper by virtue of their vital contributions to constructing and operating the various interlocking subsystems of the STAR detector, including Dr. Jonathan Bouchet, Dr. Wei-Ming Zhang, and graduate students Jeremy Alford, Jaiby Joseph, Yadav Pandit and Joe Vanfossen.

The STAR collaboration is composed of 54 institutions from 13 countries. Research at RHIC is funded primarily by the U.S. Department of Energy's Office of Science and by various national and international collaborating institutions.

One of 10 national laboratories overseen and primarily funded by the U.S. Department of Energy, Brookhaven National Laboratory conducts research in the physical, biomedical and environmental sciences, as well as in energy technologies and national security. Brookhaven Lab also builds and operates major scientific facilities available to university, industry and government researchers.