Researchers at Kent State University have discovered a new version of electrophoresis - a scientific technique used in electronic ink.

A team of researchers at Kent State University have discovered a new version of a widely used scientific technique. The technique is electrophoresis — in which an applied electric field is used to move particles dispersed in a fluid — and the new idea is to use a liquid crystal as the carrier fluid. The result is increased versatility, which may lead to new uses in display technologies, microfluidic devices and other applications. 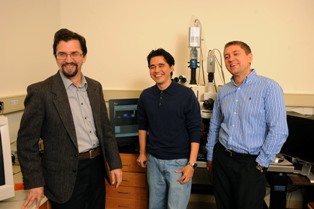 Electrophoresis is used in contexts ranging from “electronic ink” for e-book readers, such as the Kindle, to the separation of DNA fragments in genome sequencing. When a charged particle is suspended in an isotropic fluid, such as water, application of an electric field causes the particle to move in the direction of the field, with a velocity directly proportional to the field strength. This linear electrophoresis effect is limited to charged (or asymmetric) particles in a direct-current electric field.

Lavrentovich and his colleagues show that if the isotropic carrier fluid is replaced by a nematic liquid crystal (comprising of aligned, rod-shaped molecules), the electrophoresis effect becomes strongly nonlinear. In the liquid crystal, the velocity is quadratically related to the applied voltage instead of linearly as is usually the case. The result is that uncharged particles — even perfectly symmetric ones — can be moved not only by a direct current (DC) field, but also by an alternating current (AC) field, in practically any direction relative to the applied field. The new effect is caused by distortions of the liquid-crystal orientation around the particle, which break the symmetry that would otherwise prevent directed motion.

The team began their research four years ago. “Liquid-crystal electrophoresis is much more versatile than its classic fluid counterpart,” Lavrentovich said. “In a regular fluid, the electrophoretic particle must be charged or be asymmetric, whereas in the liquid crystal, it can be of any shape and of any electric charge, including zero charge. The liquid crystal allows us to better control the directionality of the particle motion in space. It is a fundamentally new phenomenon.”

Up until this point, electrophoresis was typically associated with DC electric fields.  “Our research shows that particles can be moved using alternating current,” Lavrentovich said. “The difference is important, because you can now create a steady flow of particles. Under a DC electric field the particles will eventually stop.”

“The Liquid Crystal Institute at Kent State has been the birthplace of important liquid crystal technologies such as the electric field-controlled liquid crystal displays and polymer-liquid crystal composites,” Lavrentovich said. “Spin-off companies utilizing these technologies are having a huge impact on economic development in the Northeast Ohio region. We hope that the liquid crystal electrophoretic effect will bring some new practical applications in the future.”