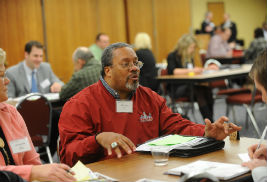 As a result of Ohio’s new construction reform law, Kent State University’s Procurement Department recently held a matchmaking event for construction management companies and diverse construction companies at the Kent Student Center. This collaborative initiative between Kent State's Supplier Diversity program within the Procurement Department and the Office of the University Architect is designed to create and enhance opportunities for diverse suppliers and contractors.

The new state regulation has changed the way construction projects are managed and also changed the opportunities for diverse suppliers. Rather than the university hiring multiple contractors for a project, the law now enables Kent State to use a variety of project-delivery methods. One new method currently being used is the construction manager at risk (CMR), in which one company oversees the entire project and is responsible for hiring subcontractors.

Kent State’s Supplier Diversity Program arranged appointments between Minority Business Enterprise (MBE)/Encouraging Diversity, Growth and Equity (EDGE) companies and major construction managers at risk to give the diverse suppliers the opportunity to present to the major companies and show them what they have to offer.

Each MBE/EDGE company had a 15-minute appointment, during which they had a chance to explain their capability statements and showcase their talents to the construction managers at risk.

"With the Foundations of Excellence construction initiative, Kent State University will provide a significant economic impact on the construction sector in Northeast Ohio over the next several years," says Michael Bruder, executive director for Facilities Planning and Design in the Office of the University Architect. "Utilizing the recently-approved construction manager at risk delivery model, we are able to assist smaller and minority subcontractors make connections for partnership opportunities with large construction companies."

“We arranged the appointments so that in one half day, we could do what would take them literally months to do — create, set up and arrange for appointments to meet with these major construction managers at risk,” says Veronica Cook-Euell, program manager for Kent State’s Supplier Diversity Program.

“Some may never have had the opportunity that they had that day,” says Cook-Euell. “It is rare to be able to sit down and present to these major companies like this.”

Cook-Euell says this matchmaking program was a step beyond the norm under the new construction reform law and the new delivery method of construction managers at risk.

“We believe this was the first time this type of event has happened in the state of Ohio since the new law went into effect,” she says.

Cook-Euell says she hoped to achieve four goals with the event.

First, the event was designed to build relationships between major primes and second- and third-tier suppliers. The initiative was also intended to provide second- and third-tier suppliers with contract opportunities they could walk away with. Also, through collaboration and networking with each other, all companies had the ability to lock arms to combine their bond capacity to take on an even larger project together. In addition, Cook-Euell says she wanted companies to see Kent State’s commitment in helping them be successful.

“I want the construction community of owners and suppliers to get a sense of Kent State’s commitment in the supplier diversity space,” she says.

Cook-Euell says the event was a tremendous success and her goals were achieved.

“Relationships were built, future opportunities were secured, future possibilities were expressed and hope filled the room. We’re just waiting to hear back on the success stories, and we do expect to hear success stories,” says Cook-Euell.

Bambi Huff, who works for B-Clean Services, Inc., says she was very impressed with the event.

“I believe the contacts I made today will help my company with other business in the near future,” says Huff.

Bill Schurman, president of Hammond Construction, thought the event was well-organized and believed the day to be very productive.

Dominic Ozanne, president of Ozanne Construction, says the matchmaker event was very helpful. “I particularly want to compliment Michael Bruder, Beth Ruffing and Veronica Cook-Euell of Kent State for their commitment and their efforts in providing this opportunity —very well done,” Ozanne says. “It’s great and wise to have the matchmaker event such as this for second- and third-tier construction companies because this construction manager at risk delivery method is so new and is a mystery. It will take quite a bit of work around many of the new intricacies surrounding this reform.”

Anna Klee, owner of Construction Support Solutions, says she worked closely with Cook-Euell to introduce the diverse suppliers to the projects and project teams.

She says they received great feedback.

“The event was very successful and important because the firms had the opportunity to meet with Kent State representatives and construction managers at risk to present their ideas and network,” says Klee.

Klee says she was happy because she owns a small company, and the matchmaking event gave her the opportunity to meet and interact with four major construction companies that she would not have had the chance to meet without the event.

"Because we have multiple construction managers preparing for multiple projects, hosting the event centrally maximized the prospects for companies on both sides of the table which they all appreciate," Bruder says.

Cook-Euell says many people thought the new construction reform law was going to limit opportunities for MBE/EDGE companies to come to the table.

“But if we would just think outside the box like we did with this event, we can still affect change from a supplier diversity perspective and still be inclusive, even within the constraints of the new law and the new delivery method,” says Cook-Euell.

“At Kent State, we’re doing our part to contribute and provide for the MBE and EDGE companies, giving them the opportunities to build these relationships, and we’ve gone even further by being a resource for the construction companies to identify and bring to them ready, willing and able companies that can serve them on our project here at Kent State and beyond,” she says.