Some 30 graduate and undergraduate students learned firsthand about public health outside of North America when they enrolled in global health immersion courses this past May.

Eight students delved into tropical disease research and the public health systems of Latin America during the second Summer Intersession Course in Guatemala and Colombia, May 17-30. Two dozen students traveled to Geneva for the fourth Global Health Immersion Course, focusing on policy, held May 17-31.

The immersion course started in Guatemala. One of the four graduate students on the trip was Jacqulyn Tomer, who is working on an M.P.H. in epidemiology.

The students also toured a free hospital and a medical school in Guatemala City.

Traveling to Cali, Colombia, the students spent substantial time with the faculty and staff of the Caucaseco Scientific Research Center.  Lectures focused on the public health system in Colombia, the country’s endemic infectious diseases, malaria research conducted at the center and vaccine development efforts. The students also visited two hospitals, one private and one public. The contrast was particularly impressive to Tomer.

“At Centro Medico Imbanaco, a private facility, the patient care appears to be a lot better than many hospitals in the United States,” Tomer says. “The lab has state-of-the-art equipment, and the techs all have advanced degrees. The in-patient rooms are private, with a ratio of nine patients to four nurses.”

But at Hospital Universitario del Valle, the public hospital, it was the complete opposite.

“Just inside the door, there was a protest that had been ongoing for three years,” Tomer recalls.  “The facility lacks the necessary staff and supplies like saline, hand sanitizer and even bed sheets. The conditions were very bad – dirty and overcrowded. It was unnerving to go from awesome to poor and impoverished.”

Next stops were to Buenaventura, an endemic region where the students visited hospitals and INSALPA, the local Caucaseco laboratory. They also went to Nasa Kiwe, an indigenous and autonomous community, where students met with local leaders to discuss health needs and culture. Nasa Kiwe was Tomer’s favorite part of the course overall.

“I saw how culture and the way of living impact the spread of disease and why problems are so serious,” she says. “For example, the children sit in such proximity in school that if one child is ill or contracts an infection, it spreads really fast.”

With a bachelor’s degree in molecular and cellular biology, Tomer plans to finish her M.P.H. in 2015 then pursue doctoral study in infectious disease epidemiology.

On the other side of the world, 18 Kent State public health and nursing students, along with six Case Western Reserve University graduate students, spent two weeks in Geneva studying global health policy. The trip coincided with the 67th World Health Assembly (WHA), a six-day event attended by representatives from all 194 member states, who meet annually in Geneva to determine World Health Organization (WHO) policies, budgets and leadership.

The Kent State contingent enjoyed unique status at the meeting – Kent State is among only a handful of universities in the world that sends credentialed students to the WHA. Kent State holds this special status due to strong relationships with Geneva organizations cultivated by Ken Slenkovich, assistant dean for operations and community relations, who served as faculty for the Geneva course, along with Professor Carol Sedlak, Ph.D., and Tracey Motter, baccalaureate program director from the College of Nursing.  M.C. “Terry” Hokenstad, Jr., Ph.D., distinguished university professor, Mandel School of Applied Social Sciences, represented Case Western Reserve University on the faculty team.

The course was full of revelation for Brianna Kinnear, who will complete her bachelor’s degree in December. It was Kinnear’s first trip outside the United States, and for someone studying health services administration, she says “Visiting the WHA was like being a kid in a candy store, seeing what’s going on in the world and learning from delegates from all the different countries who are so successful in battling enormous health issues. It was surreal to be able to see what you’ve learned about, to actually see what’s going on and not just read about it, to see the delegates asking questions in those important meetings on subjects that will have real impact in the world.”

Not only did Kinnear learn about the world, she also learned about herself.

“There was a lot of self-reflection regarding what I can do by myself and what my four years at the College of Public Health have prepared me to do,” she says, adding that the course enhanced her confidence and helped her discover what motivates her. From the trip, she has become “really passionate about mental health and human rights” and is investigating public health graduate programs.

Laura Bevington was one of the master’s students who traveled to Geneva. This was her fourth education-abroad experience, after an undergraduate visit to Southeast Asia, a summer internship at the German Embassy in Leipzig and a five-week medical mission in rural Western Kenyan last summer.

Meeting Margaret Chan, director-general of the WHO, attending sessions of the WHA and visiting the International AIDS Society, the International Committee of the Red Cross and Doctors Without Borders were highlights of the course for her.

“Think globally locally was what we were advised to do,” she recalls. “Figure out how other places are fighting your same problems and apply those solutions locally.”

Bevington collaborated with several nursing and pre-med students on a U.S. infant mortality group project during the course.

“Our country has one of the highest infant mortality rates in the developed world,” she says.

Bevington, who secured “a really great job” as a financial analyst at a private health insurance company upon graduation in May, dreams of perhaps one day working in global maternal and infant health.

“Coming at the end of my final semester, the course was an invaluable experience, giving me a vision of the continuum of health,” observes Bevington.  “We were all young professionals, learning that prevention and the clinical side work together at all levels to achieve the health goals we all want.” 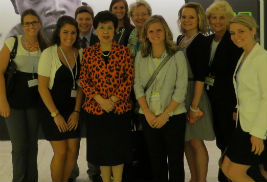 Kent State Researcher Exposes MRSA Risk at Northeast Ohio Beaches
Beachgoers know there is always some risk of disease, but a recent study by a Kent State University researcher shows they may not be aware of all the...
Hurricane Harvey: Students Share Stories of Survival, Triumph, Defeat
Kent State students continue to feel the impact of Hurricane Harvey on their education and families.
Kent State Researcher Lends Expertise to Commission Recommending Reduction of Antibiotic Use in Food Animals
Antibiotic resistance is a public health crisis that threatens the lives of millions of people around the world. Yet, according to a new report...
College of Public Health
Office of the Provost