Kent State public health students continue to gain national exposure for their work and to secure fellowships and jobs with prestigious organizations.  Profiles of four recent graduate student accomplishments highlight the impact that the college and its scholars are having in the public health field. 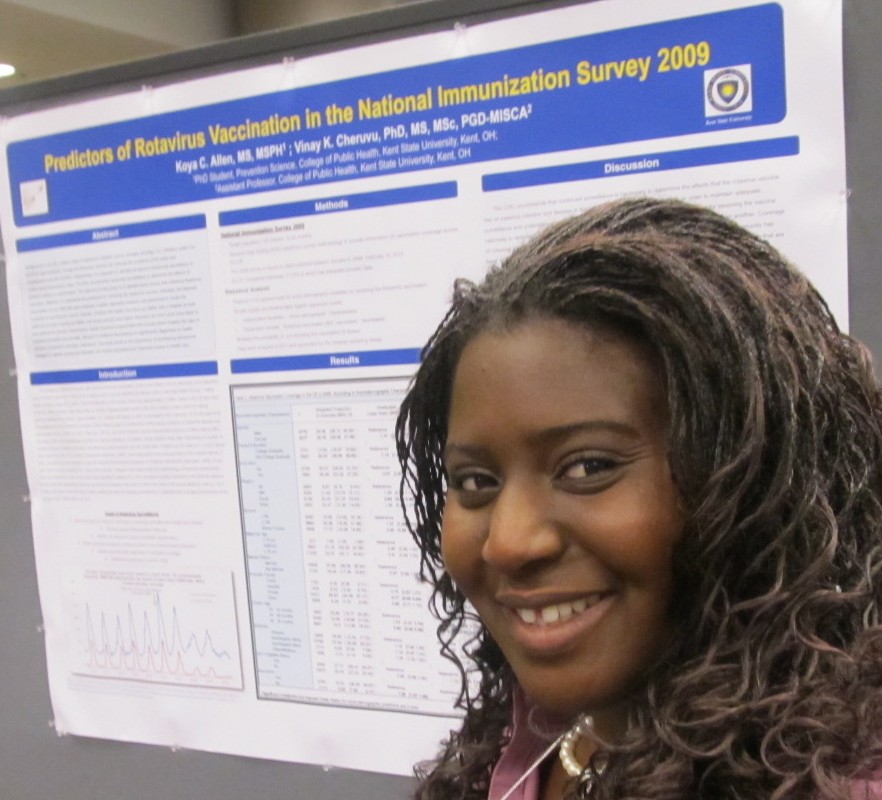 Doctoral student Koya Allen’s class research on rotavirus vaccination led to a poster session at the International Conference on Emerging Infectious Diseases, held in Atlanta in March.  Her Predictors of Rotavirus Vaccination in the National Immunization Survey also was highlighted in the April 19 editions of Skin & Allergy News and Pediatric News.  Allen’s investigation identified factors influencing childhood vaccination and concluded that it is notably dependent upon health insurance and parent’s educational attainment.  “Rotavirus is a significant global health concern.  This is the first time we’ve been able to collect data in the United States on the vaccination, which was begun in 2006,” she says.  “My study points to the importance of developing educational strategies for parents among low-educated, low-income populations for improved access to health care,” she explains.  Allen has a master’s degree in biohazardous threat agents and emerging infectious diseases from Georgetown University, as well as an MSPH degree from Tulane University.  She came to Kent State for her doctoral study because of prior work with Dr. Mark James at Tulane, when he was professor and vice chair of the department of tropical medicine.  Allen’s rotavirus research also was recognized as best doctoral student poster presentation at Kent State’s 27th annual Graduate Student Senate Research Symposium awards in April.  Allen collaborated with Dr. Vinay K. Cheruvu, assistant professor of biostatistics, in this recent work.  The Graduate Student Senate also awarded Allen an international travel grant to conduct a pilot study, Significance of Culture and International Travel Behavior on Dengue Risk:  Compliance among Travelers to Trinidad Carnival 2012.  Allen has data analysis for this study under way and is taking off in August for field work in Bahia, Brazil, for her dissertation proposal. 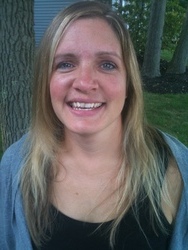 Aimee Budnik, prevention science doctoral student, was one of five presenters on achieving health equity at the 2012 National Health Promotion Summit, hosted by the Department of Health and Human Services’ Office of Disease Prevention and Health Promotion and the Association for Prevention Teaching and Research.  She presented findings from her study, Validating the Radimer Hunger Scale in the HIV/AIDS Population:  An Exploratory Factor Analysis, on April 11 in Washington.  “While previous studies have examined the influence of nutrition with HIV/AIDS, and introduced the idea that food security may play a larger role than previously addressed, none have focused on describing a valid and reliable instrument,” she explains.  “This preliminary analysis suggests that the Radimer scale could serve as a rapid screening tool for public health professionals to identify hunger,” she continues.  “It also could serve as a means to collect organizational or community-level data to advocate policy changes in this high-risk population,” concludes Budnik, who collaborated with Cheruvu and Dr. R. Scott Olds, professor of social and behavioral science.  Budnik is a registered dietitian, holds a master’s degree in public health nutrition and played key roles in leading social-service organizations in the New York metropolitan area.  She received the college’s 2012 distinguished faculty award for her graduate-assistant teaching role, as well as the 2012 graduate student excellence award in the prevention science program.

MPH student Amy Lyzen is wrapping up a three-month fellowship at Summa Health System’s Center for Women’s Health Research, working with Dr. Michele McCarroll, its director of research.  Lyzen, who has volunteered at Summa for about 18 months, applied for and received the summer fellowship and has been collaborating on a variety of projects, from collecting data and writing research protocols to assisting with manuscript preparation.  Her biggest learning experience is a broader perspective on how research is done from beginning to end.  “It’s an amazing feeling when you get to participate in the entire process and see how much work goes into it,” she says.  At the fellowship’s conclusion, Lyzen will make an in-house presentation on her investigation about surgical team cohesiveness, which is examining the effectiveness of team culture on patient safety in the operating room. 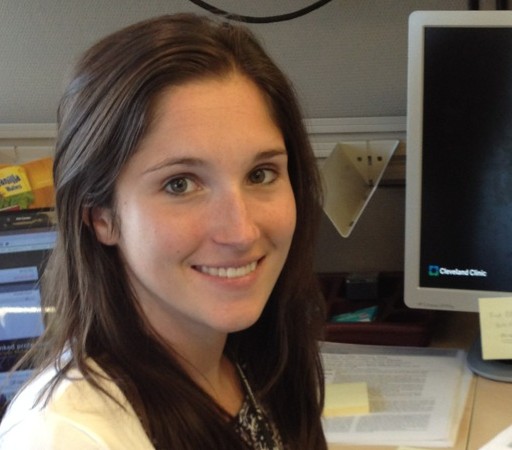 Theresa Zavodnik, BS ’10, MPH ’12, has joined The Cleveland Clinic Foundation as a data analyst in its top-ranked heart and vascular institute.  Her Kent State education prepared her well for the challenges of her new endeavor.  “All my coursework helped lay a foundation for me to be successful, building the quantitative skills that I needed and giving me experience with key statistical software,” says Zavodnik.  She feels “honored” that she got the job, which is consistent with the career goal she established upon entering the program, encouraged by Dean Sonia Alemagno.  “I met the dean when I was a student worker in the Kent State executive administrative offices,” says Zavodnik.  “Knowing that I was an undergraduate math major, she sparked my interest in biostatistics and urged me to consider the MPH program.”