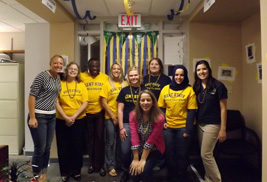 With 10 campus offices competing, the College of Public Health conquered its challengers by decorating its offices as Dix Stadium, complete with a scoreboard and end zones.

This year’s Homecoming theme was “New and Old, Forever Blue and Gold.” Participating offices were judged on creativity, use of theme, use of physical space, visual appearance, and appeal and incorporation of staff. The office decorating contest was judged by the 2013 Homecoming Court.

The winner received a traveling trophy along with coffee and donuts for the entire office.