One stepping stone in the pursuit of an exceptional public health career is the MPH degree.  Four recent graduates demonstrate the truth to that statement, marking significant career advancement since earning their Kent State degrees:  Frank Migliozzi, director of environmental health for the Trumbull County Health Department; Sunita Shakya, an epidemiology student in the college’s doctoral program; Lauren Skubon, an innovation systems analyst at The J.M. Smucker Company; and Benjamin Villarreal, second-year medical student at the University of Texas Medical Branch at Galveston.  They shared their success stories with Public Health Quarterly.

Frank Migliozzi was a member of the inaugural cohort in the college’s Health Policy & Management MPH program with a leadership and organizational change focus.  The program is designed chiefly for working adults and meets on weeknights.  Migliozzi has embraced what he learned with a passion and is using it to improve service to his community.

“My whole job has been transformed by what I learned in the program.  It’s helped me, number one, to be an effective leader, not just in our health department, but in our community as well, selling implementation and engaging stakeholders.  Number two, I know how to make effective organizational change by developing a shared set of values and bringing everyone together to create a new vision.  These approaches have breathed life into our organization.  There’s a better sense of trust, employees know they are part of the team, and they highly perform as a team,” he says.

As part of his MPH practicum, Migliozzi developed a community health assessment, a health department strategic plan and a community health improvement plan for Trumbull County, the three prerequisites for accreditation by the Public Health Accreditation Board, a current imperative within the State of Ohio for local health departments.  In the process, Migliozzi employed strategies and skills learned in his master’s program, including how to plan, assess, implement and evaluate public health programs.  He was asked to share lessons learned at the Association of Ohio Health Commissioners 2014 Fall Conference in September.  “My leadership courses greatly influenced an increased collaborative effort as the process moved along,” Migliozzi says.  “I was able to change perceptions within our public health stakeholders to challenge the status quo and look for best alternatives to implement and evaluate, which ultimately will lead to improved health outcomes,” he says.

“Even though I’ve graduated, my practicum will be ongoing for the next five years,” he says.  “I’m looking forward to my future, that’s for sure.”

Sunita Shakya is an international student from Nepal and completed undergraduate education in healthcare management there.  But when she decided to pursue advanced study to gain broader public health expertise, she couldn’t find a suitable program in Nepal and decided to try her luck gaining admission to a U.S. or Indian university.  “My brother did his undergraduate study at Kent State, so it naturally was on my list,” she recalls.  To her delight, she was accepted into the college’s Health Policy & Management MPH program and was granted a student visa.  But on the way here, she had a change of heart.  “I decided what I really wanted to do was research and investigation about different diseases and conditions, so the first thing I did upon arriving was ask to switch to epidemiology,” says Shakya, who’s never looked back and is now engaged in doctoral study in the field.  “I love the epi way of looking at things.  It’s the best decision I ever made in my life,” she says.

Shakya says she found a unique combination of resources at Kent State during her master’s journey.  “I was offered the opportunity to work with Dr. Madhav Bhatta on a project with refugees from Bhutan,” she says.  “He was looking for someone who could communicate well in Nepali to translate documents, so because of my native language, I got a research assistant job with him.  Under his guidance, I really learned a lot and was able to take on bigger and bigger projects,” she says.

Along the way, she also worked with several other faculty members on their research.  The cumulative success in her MPH program gave Shakya the confidence to pursue doctoral study.  “While completing the MPH, I realized I wanted to go for the PhD.  It’s not like it was a solid goal before I came to the United States.  Growing up in Nepal, it was considered a really high achievement and not for me.  Three years ago, it seemed like a really big thing and unachievable.  But coming to Kent State, undertaking my MPH and working with different professors, I could see myself doing it and planned to do it for sure,” she says.  Shakya started her doctoral classes while still in the MPH program, to ease the transition.  She now has completed her coursework and will sit for her comprehensive exams by February 2015.

Her dissertation proposal is under way.  “Because I had the chance during my MPH to look closely at health issues in refugee populations, I knew where I wanted to head.  My core doctoral research will focus on the prevalence of blood lead levels and failure to thrive among refugee children and the resultant impact on their behavioral development after resettling here,” she explains.  Shakya is presently working on a review of existing scholarship and developing her research framework.  She will be examining data from the Bhutanese refugee population resettled in the North Hill area of Akron, with Akron Children’s Hospital as collaborator.  “The people are ethnic Nepalis who fled from Bhutan to Nepal as refugees and spent almost two decades in refugee camps in Nepal.  Their culture is so much aligned with the Nepali culture,” she says.

Shakya dreams of a career in immigrant and refugee health with the Centers for Disease Control and Prevention, working in health issues and intervention programs.  “I want to give back to my country, to contribute to my country, my people,” she says.  Immigrant health connects me to my country.”

Lauren Skubon is a coffee authority.  Receiving a bachelor’s degree in nutrition and dietetics, she joined the coffee research and development team of The J. M. Smucker Company as a lab technician.  Prior to that, she put herself through school managing Mocha Joe’s Coffee House in Stow, many times on the job at 3:30 a.m. to bake and prepare for the day’s business, followed by classes from 11:00 a.m. to 4:00 p.m.  She also must have been fueled by coffee to complete her MPH in less than two years, while working full time at Smucker.

“All through my undergraduate education, I knew I wanted to pursue a master’s degree, but in an area broader than nutrition, and I chose the full-time MPH program in Social & Behavioral Sciences because it is so closely related to my undergraduate studies.  Just as I was accepted, I also got the coffee R&D lab job at Smucker,” Skubon recalls.

Skubon took three or four classes a semester.  “The company was pretty flexible and understanding, as they have an interest in higher education.  Sometimes I had a 2:15 p.m. class, and I was able to go into work really early and get my job done, then go to class,” she says.  “Sometimes I wonder how I got that much done in two years,” she muses.

Her coffee lab responsibilities included brewing large and small quantities of coffee for sampling; labeling and documenting samples; cleaning, sanitizing and calibrating lab equipment and brewers; sorting and logging in product samples; and assisting with sample collection and acquisition and data management.  Skubon worked in the R&D lab until March 2014, when she moved into her new position.  “I talked to several managers within coffee R&D and found a position that fit for advancement.  It’s not immediately interconnected with either of my degrees, but it’s a stepping stone to several possible future opportunities in which I can use both my degrees for a company I am passionate about,” she says.

As an innovation systems analyst, she organizes and manages documents codifying the many specifications for Smucker’s coffee products.  “I maintain organization of all the specifications for coffee products in various data warehouses, so our plants can ultimately have the most up-to--date information and manufacture our products.  Every coffee product must pass through me at some point,” she explains.  “It’s a lot different from testing coffee in the lab, and it’s been an interesting transition.  I’m able to combine my content experience, gained from my lab assignments, with the production specifications to bring different knowledge to the table,” she says.

During the interview process, Skubon knew that management liked that she had the MPH.  “Because of completing that program while working at Smucker, they were able to see first-hand that I was a hard worker and able to handle the workload,” she recalls.

Ben Villarreal is in his second year of medical school at the University of Texas Medical Branch at Galveston.  You might say that this native Texan is a driven young man, deliberately planning each step toward his desired career in medicine.  But high flyer might be a more accurate description.

“I earned my pilot’s license when I was 15, three years before I got my driver’s license,” Villarreal recalls.  “I thought it was a better way to spend my money – on aviation fuel, rather than automotive,” he jokes.

Villarreal plans a career in aerospace medicine.  While completing his undergraduate degree in biology, Villarreal took a global health class with Dr. Madhav Bhatta.  The assistant professor recruited Villarreal to pursue the degree at Kent State.  “I knew it would be helpful for my career later, and I wanted more life experience before applying to medical school,” he says.  “Having the degree gives me a competitive edge with my medical school colleagues – I’m one of only two having the public health perspective,” Villarreal observes.

Villarreal drew on his epidemiology studies this past summer, when conducting research with the UTMB Aerospace Medicine Center, looking at pilot EKG screening records for correlation with heart disease.  “Asymptomatic screening with EKG is not considered effective for the general population and is against recommendations by the American College of Physicians,” Villarreal explains.  “But airline captains over age 40 are required to have an annual EKG as part of their physical exams for a first-class medical certificate.  False positives may affect pilots negatively, as they might not qualify for a license.  Our research will help find the right balance,” he says.

“While a modest-looking facility, the Aerospace Medicine Center closely collaborates with NASA, and it’s one of the only dedicated U.S. clinics for aerospace,” Villarreal says.  “Some really big names in aviation health work there, including the chief medical officer for Virgin Galactic.”  In addition to tending to astronauts, the clinic is known for working with the Federal Aviation Administration and pilots from across the country to determine whether certain medical conditions truly pose a risk to flying or might be waived in the medical certification process.

Aerospace physicians are required to have an MPH, because the specialty is certified by the American Board of Preventive Medicine.  “They’re expected to understand preventative medicine and be competent in harsh or austere environments like space or Antarctica,” Villarreal says. 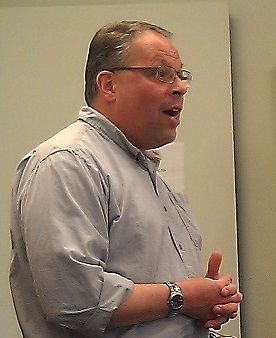 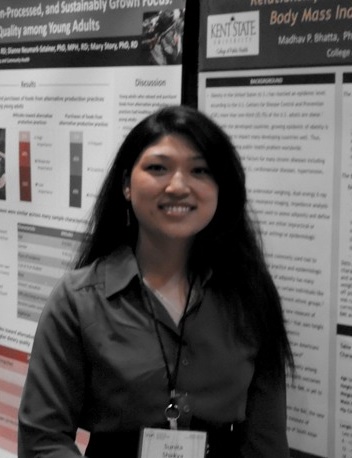 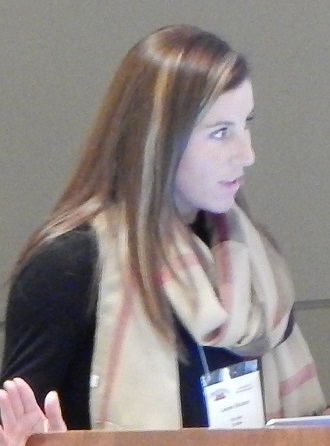 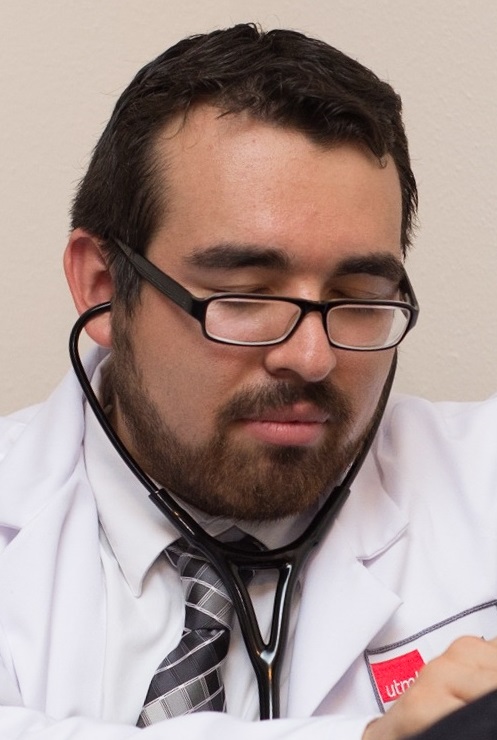