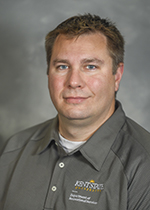 The January 2019 Division of  Student Affairs’ Employee Excellence Award has been awarded to James Underwood, Assistant Manager, Ice Arena in the Department of Recreational Services.

Kim Rufra, Director of Recreational Services stated,  “Jim has worked at the Kent State Ice Arena since 2005 starting as a student employee, moving to part-time and then in 2011 becoming full- time.  Originally hired to oversee the youth and adult hockey programs at the Ice Arena, Jim was tasked with taking over the Division I KSU Hockey Club team in 2012.  In his first season as head coach, Jim inherited a team with 4 wins and 30 losses and each year since has improved the number of wins.  The last two seasons, the team has won 20 or more games and is on pace to do the same for the 2018-19 season.”

Kim also added, “While wins are important and a measure that many people look at, the quality of the student-athlete that Jim has attracted to Kent State is the story that needs to be told.  In the last four years, 24 of 98 players made the Dean’s list. Three of those students were on the President’s list.  Entering the 2018-19 season the team had a cumulative GPA of 3.123.”

“Most recently Jim developed a proposal and received approval to start a Division II KSU Hockey Club team beginning Fall 2019. In addition to his hockey responsibilities, Jim serves as a Hearing Officer for the Office of Student Conduct and provides support as needed to Recreational Services.”

Upon receiving this award, Jim commented, “I am extremely honored to be receiving the Employee Excellence Award for the Division of Student Affairs.  I am earnestly grateful for the recognition I have received for my work, because I am very sure that other nominees for this award were as capable if not more, of winning this award.”

“Winning this award would not have been possible without the inspiration of Bill Switaj and Kim Rufra, for whom I have the deepest respect.  I sincerely thank both of them for the nomination and for helping me reach a stage where I can proudly accept this award as a mark of my achievement. I also promise to only get better at my work and become my best self. Thank you!”

As the winner of the Employee Excellence Award, Jim was presented a certificate and will be treated to a special lunch with Vice President, Shay Little.  Please join us in thanking Jim for his dedication and commitment, and for his continued efforts in helping us to be UNDENIABLY KENT STATE!