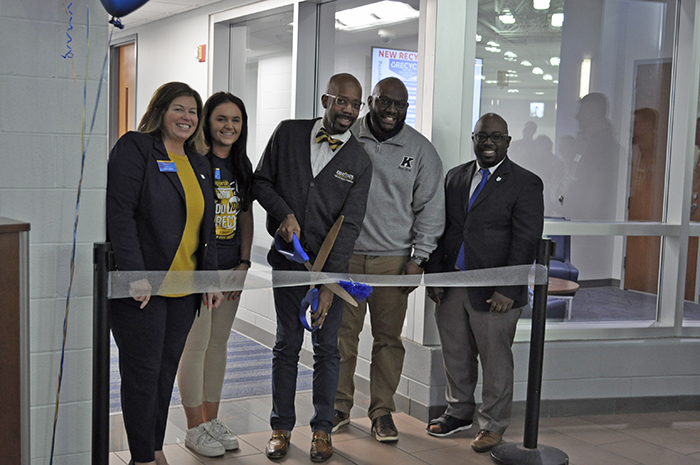 In celebration of Black History Month, Recreational Services commemorated the founding of the National Intramural-Recreational Sports Association and celebrated Recreational Sports & Fitness Day on Friday, Feb. 21. Access to the facility was free for everyone and programs were conducted throughout the day which represented the breadth of recreational programs. Additionally, a small ceremony was held to unveil the new historical information panels that commemorate the founding of NIRSA, the history of the Department of Recreational Services on the Kent State campus and the history of the Beverly J. Warren Student Recreation and Wellness Center. Speakers included Kim Rufra, Director of Recreational Services; Dr. Lamar Hylton, Interim Vice President for the Division of Student Affairs; Dr. N.J. Akbar, Assistant Dean for Academic Diversity Success with University College; Marquis Davis, Academic Diversity Outreach Coordinator for the College of Business Administration and Julie Grund, President of the Student Recreation Council.

After WWII, GI Bill funds increased enrollment on college campuses and forced the expansion of recreation programs and facilities. Although recreation opportunities increased, the campus recreation field did not become professionalized until the 1950s. Dr. William Wasson, Intramural Director at Dillard University, who worked under Elmer Mitchell at the University of Michigan, developed an intramural program at Dillard University. In 1948 he commenced a study on intramural participation with funding from the Carnegie Foundation. The results of his study were shared with the institutions that participated in his research and culminated in an Intramural Summit at Dillard University on February 22, 1950. 20 Intramural Directors representing 11 Historically Black Colleges & Universities gathered and formed the National Intramural Association. The NIA was the first organization of its kind, bringing intramural program leaders together to share skills and wisdom to advance the good of the work of their profession.

Membership and involvement in the NIA progressed, as did conversations about a more formal preparation for the field of campus recreation. Early in the 1970s, NIA members discussed the need to have a focused curriculum to prepare professionals in the field. They called for standards and certifications, as well as for the inclusion of women into the field. Programming also began to expand outside of sports and intramurals. Because of this shift, in 1975, the NIA changed its name to NIRSA, the National Intramural-Recreation Sports Association. The name better reflected the diverse services and programs provided by members. During this period, NIRSA produced its first publications, professional journals and officiating materials and continued to move the association forward.

In the 1980s, new expansive facilities for student recreation emerged so institutions could remain competitive. Bowling Green State University was the first school in Ohio to open such a facility. The 1990s brought the focus on specialty areas within the profession. New positions emerged to specialized areas of expertise such as outdoor adventure, fitness & wellness, experiential education and club sports. Campus recreation continued to inspire a growing community of professionals open to sharing, providing inclusive opportunities, and as always, healthy competition. Facilities and programs became more expansive, opportunities more inclusive, and students were at the heart of it all.

In 2012 NIRSA enhanced the organization's name to NIRSA - Leaders in Collegiate Recreation – promoting programs, a diversity of needs, interests, backgrounds, perspectives, and people. Campus recreation visionary leaders, led by Dr. William Wasson, formalized programming options and the need for formalizing a governing body based on the unspoken hypothesis that students who in engage in recreational opportunities perform, persist, and graduate at higher rates than those who do not. In recent years, research has formally established this correlation! Today, campus recreation departments reach student participants in large numbers and are one of the largest employers on campus. Preparing some of the most balanced, engaged, respected and prepared student leaders. Our mission is to foster an environment that supports all aspects of the student experience and provide a community that is accepting and a place that students want to be.