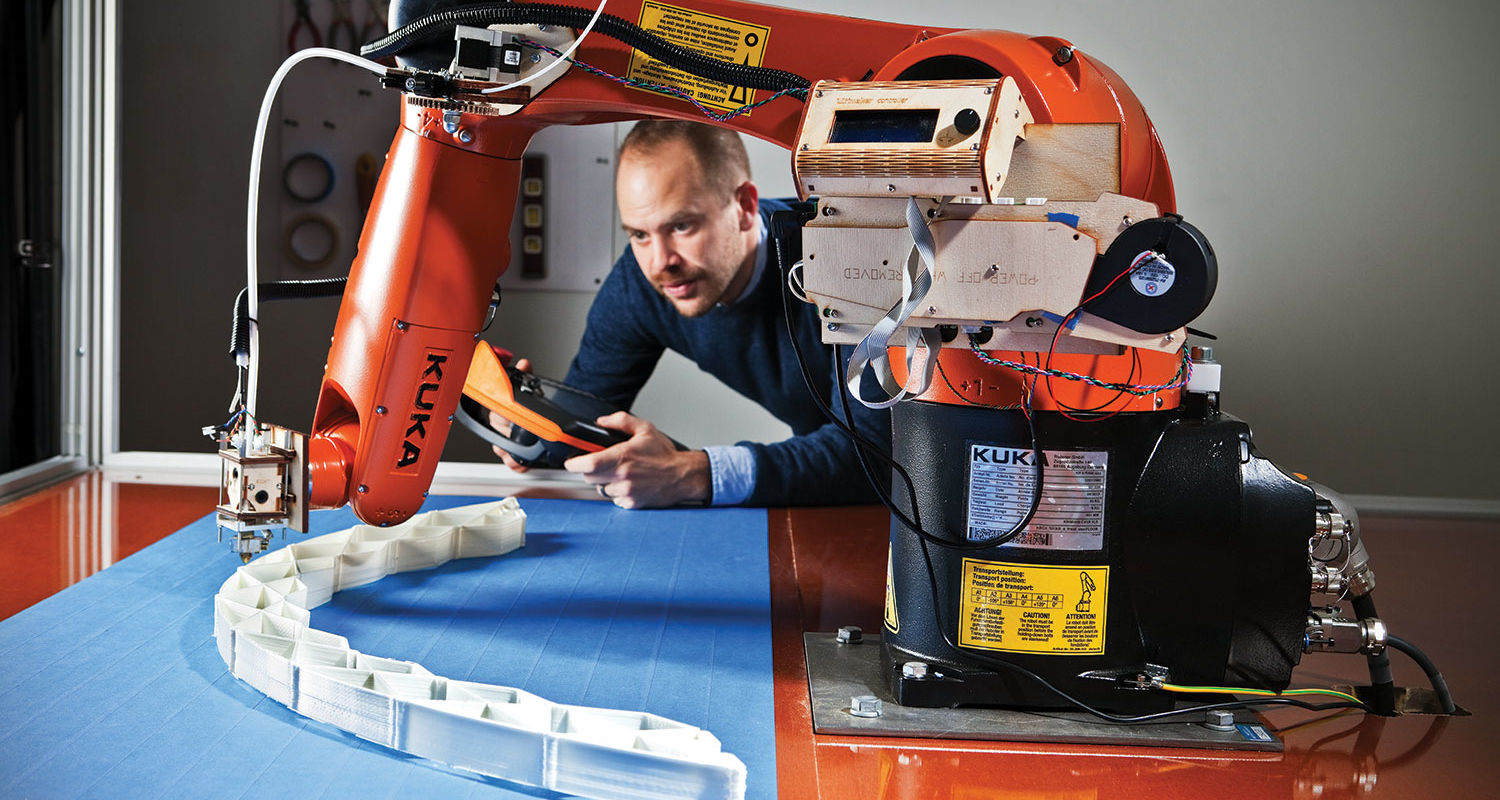 It took four hours for nine undergraduate architecture students in Brian Peters’s lab to build their own 3D printer, using a kit.

The skills they are learning will prepare them to use the new tools of their trade and the trend toward “anytime, anywhere” manufacturing.

Peters, assistant professor in the College of Architecture and Environmental Design, is harnessing the tools of digital fabrication to create innovative building materials and processes to upend traditional building design methods.

His laboratory is one of the “gardens of digital design” around the Kent State campus, said Bill Willoughby, associate dean of architecture. “Cutting edge individuals like Brian are taking this forward.”

Peters joined Kent State in 2013 after working on digital design projects in Amsterdam and Barcelona, where he trained on new tools and techniques. He earned a second master’s degree in Barcelona, a hub of new design, from the Institute for Advanced Architecture of Catalonia after earning his first one at the University of Illinois at Chicago.

Peters, who taught at the Piet Zwart Institute in Rotterdam, began to realize “all you can do with a 3D building design,” such as customizing a facade and printing building materials on demand and on site.

One of the projects he helped build in Amsterdam was the “Kamer Maker” (room maker), a 3D printer housed in a nearly 20-foot high shipping container located near the center of the city. When its garage-style doors were open, people could walk in and use the room-sized printer to make large-scale objects.

At Kent he is refining his 3D printed brick project, called Building Bytes. The designs include bricks with a beehive-like internal pattern that could house insulation for a wall system or be used as floor trusses. He is also experimenting with printing rubberized plastic to make snap-fit wall panels.  He plans to work with local companies to test his 3D printed blocks for structural integrity. Peters has used plastics and liquid ceramics in his designs but is exploring the use of other materials, such as concrete and bio-based materials.

He plans to scale up his designs by using a robot arm that was installed in his lab last fall. The six-axis robot arm allows for more design freedom than the typical three-axis 3D printers.  The robot arm can also pick up and stack bricks that are made on a smaller printer, and it can be fitted with attachments to extrude larger designs - up to its three-foot radius - taking advantage of three additional axes of movement.

Kent State is one of the few universities to have a robot arm for architectural design, he noted.

Just having access to tools like 3D printers and the robot arm spurs innovation, said Willoughby. “You put people like Brian in a room with them and see what happens,” he said.