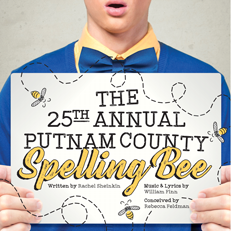 An eclectic group of six tweens vies for the spelling championship of a lifetime.

While candidly disclosing hilarious and touching stories from their home lives, the students spell their way through a series of (potentially made-up) words, hoping never to hear the soul-crushing, pout-inducing, life un-affirming “ding” of the bell that signals a spelling mistake.

Six spellers enter; one speller leaves! At least the losers get a juice box.

Laurel Seeds: Music Director
Laurel Seeds received her Bachelor of Music and Master of Music degrees in Music Education and Vocal Performance from Kent State University. She is an Associate Professor in the Music Department at Kent State Stark and teaches applied voice, contemporary voice and class piano. Laurel is a frequent recitalist, performer, accompanist and music director and has performed with The Lyric Theatre Ensemble, Akron Lyric Opera Theatre, Akron Baroque, Canton Comic Opera, Canton Symphony Youth Orchestra, the Cleveland Orchestra Blossom Festival Chorus and the Concert Series of The English Church of St. Mark’s in Florence, Italy. She has recently music directed The Mikado, Crazy for You, Songs for a New World, I Love You Because and Spring Awakening. She is a member of Delta Omicron, The MacDowell Music Club, The National Association for Music Education, Ohio Music Education Association and is active as a Solo and Ensemble adjudicator in the state of Ohio.