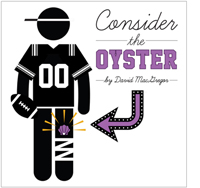 After watching his favorite team win the Super Bowl, Gene spontaneously proposes to his longtime girlfriend Marisa, and in the midst of his excitement, breaks his leg. The oyster shell the doctor leaves in Gene’s leg to aid in healing sets off a chain reaction of odd feminine changes in Gene’s physicality, hormones and emotions. Just as an oyster changes from male to female over the course of its life, Gene is changing, too. He begins to question his feelings for his new fiancée, and his relationships with friends and family become awkward and strange. Watch as gender identity and humor explode on stage in comical yet thought-provoking ways.

C.J. Pinter: Gene
C.J. Pinter has appeared in many of Kent State Stark's theatre productions, including The Maiden's Prayer, Our House, Almost Maine, The Bicentennial Project, and has stage managed and assistant directed shows One Sight Hitch and These Shining Lives. He spent the past year studying acting in Los Angeles, and is now looking to complete a BFA here at Kent State. When he is not acting, C.J. enjoys performing as a frontman in his band, playing The Legend of Zelda, and spending time with his friends and family. He would like to thank the director for all of the exciting opportunities he has had, and wants to wish him a happy retirement!

Spencer Morgan: Eliot
Spencer Morgan is a junior at Kent State Stark, and is majoring in middle childhood education, along with a minor in theatre performance. Spencer participated in many productions throughout high school, and had the chance to participate in two shows during the 2016-2017 season of the Little Theatre of Tuscarawas County; playing multiple parts in Shuddersome: Tales of Poe, and Richard Stanley in The Man Who Came to Dinner. Aside from theatre, Spencer enjoys reading, playing video games, and blasting Fleetwood Mac as he drives to and from the campus every day. He would like to thank the director for giving him this opportunity, and his family for supporting him every step of the way.

Colleen Archer: Marisa
Colleen Archer is excited to be returning to the stage after a long hiatus! Colleen is a senior applied communications major, with minors in public relations and theater performance. In her spare time she enjoys coaching color guard and dance team at Minerva High School, spending time with friends and family, and anything to do with coffee! She would like to thank Brian for giving her this wonderful opportunity, her family and friends for supporting her, and her boyfriend for always pushing her outside of her comfort zone, and towards being the best person she can be.

Channon Booth: Kay
Channon Booth is happy to return to NE Ohio after spending 17 years in NYC. With her sketch comedy troupe in NY, Disgruntled Bit Players, she performed at such notable venues as Caroline's Comedy Club and Upright Citizens Brigade. She toured the US twice, once performing at The Grand Ole Opry, and was a resident actor at The State Theatre of Virginia, Barter Theatre. She performed locally in Akron, Canton, Cleveland, Massillon and Kent, for many years as well. She holds a BFA in Acting from Kent State University.

Breanna Morton: Assistant Director / Stage Manager
Breanna Morton is a senior at Kent State Stark, majoring in theatre management. She graduated from Hoover High School in North Canton where she performed in Les Misérables and Beauty and the Beast; worked on Peter Pan, Aida, Harvey, The Paper Chase, Wizard of Oz, and It's a Wonderful Life; and she also was stage manager for It's Murder in the Wings, You're a Good Man, Charlie Brown, and Aladdin Jr.  At Kent State Stark, she assistant directed Reasons To Be Happy, stage managed What We're Up Against, Blur, Almost Maine and The Bicentennial Project; and performed as Frances in These Shining Lives and Annie in Silent Sky.

Morgan Brown: Assistant Stage Manager
Morgan is currently a sophomore at Kent State Stark, with a major in theatre performance. She has been acting for most of her life, during which time she has had the privilege of playing a multitude of roles, including Oliver in Oliver!, The Ghost of Christmas Past in A Christmas Carol (Players Guild Theatre), Peter Pan in Peter Pan (GlenOak High School), and most recently, Steph in Reasons To Be Happy and Henrietta in Silent Sky at Kent State Stark. Morgan would like to thank her family and God for their constant love and support, and Brian Newberg for the honor of being involved with this show.

Sarah Young: Costume Design Assistant
Sarah is very active in community theatre all around the area, such as the Players Guild Theatre in Canton where some of her previous credits include The Ghost of Christmas Past (Christmas Carol), Little Pig #3 (Shrek the Musical), Star to Be (Annie), and Audrey (Little Shop of Horrors). She has also appeared as Marcy Park (The 25th Annual Putnam County Spelling Bee), Janet Van de Graff (Drowsy Chaperone), and Violet (Violet) all at the Carnation City Players in Alliance. Additionally, she has performed onstage in various productions at The North Canton Playhouse, Weathervane Community Theatre, Plain Center for the Performing Arts, and Lake High School, where just a few of her other favorite credits include Natalie in Next to Normal, Nellie Forbush in South Pacific, Maria in The Sound of Music, and the Witch in Into The Woods. Sarah performed in These Shining Lives and Spring Awakening and was costume design assistant for Silent Sky at Kent State Stark. She is pursuing a major in theatre performance.

Anthony Antoniades: Crew
Anthony Antoniades appeared in Huck Finn’s Story, Dating Is Tough To Do...And Funny, Too!, Plumfield, Iraq, Buried Child, Blur and These Shining Lives at Kent State Stark, where he also stage managed Songs for a New World and Evil Dead: The Musical, served as lighting design assistant for Anton in Show Business, sound design assistant in Silent Sky and served as crew for Reasons To Be Happy, Almost, Maine, The Bicentennial Project and What We're Up Against. He is a theatre major at Kent State.