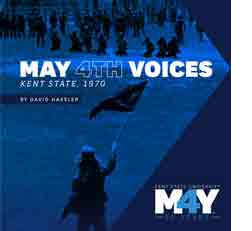 “May 4th Voices: Kent State, 1970”  brings together first-person narratives about the May 4, 1970, shootings at Kent State University. First performed in 2010 in commemoration of the 40th anniversary of the shootings, the “May 4th Voices”  play is composed of verbatim excerpts from the Kent State Shootings Oral History Project.

Weaving these voices and stories together, Hassler’s play tells the human story of May 4, 1970, and its aftermath while capturing the tragedy, which had a profound impact on the nation and is credited as a catalyst in changing Americans’ view toward U.S. involvement in Vietnam.

Kent State University’s COVID-19 preventative and proactive actions call for the cancellation of all events for the remainder of the spring semester. We are following recommendations from state health authorities to limit large gatherings and practice physical distancing to slow transmission of the virus. We take these steps to ensure the health and safety of our patrons and to be proactive in an effort to prevent illness.