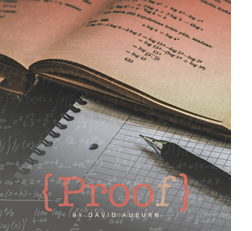 Winner of the Pulitzer Prize for Drama, David Auburn’s “Proof” is a passionate, intelligent story about fathers and daughters, the nature of genius and the power of love.

The story develops around Catherine, who has inherited her father’s mathematical brilliance, but is haunted by the fear that she might also share his debilitating mental illness.

She has spent years caring for her father, and she feels left alone to pick up the pieces of her life until a newfound connection with Hal, one of her father’s former students, brings about “a groundbreaking proof.”