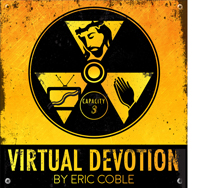 It’s the end of the world as we know it; pollution, terrorism and disease have taken over humanity. Three characters, Pete, Anne and Ruth – all members of a broken family – attempt to sell their faith to nonbelievers in various, and sometimes violent, ways, as a last-ditch effort to save souls, including their own. Through a series of ironic, laughable and most unfortunate events, all of the characters, including the returned Son of God, Jesus Christ, find one another on the Home Shopping Network selling religious artifacts. But now that they are finally together, is it too late to stop the ensuing Armageddon?

Sean McCormick: Rev. Pete
Sean is excited to make his debut performance at Kent State Stark. Located in the Cleveland area, Sean's previous theatre experience includes The Lyons (Curtis Lyons) at Chagrin Valley Little Theatre and performances at Broadview Heights Spotlights in Footloose, The Musical (Reverend Shaw Moore), And Then There Were None (Anthony Marston), and Boeing Boeing (Bernard Lawrence). Outside of theatre, Sean is a college lecturer in philosophy and comparative religion at Cleveland State University, an auxiliary police officer, and a bartender. He hopes that you all enjoy the show!

Cassandra Terry: Ruth
Cassandra is a recent graduate of Kent State University with a bachelor’s degree in Human Development and Family Studies. As a student, she appeared in several theatre productions and is incredibly excited and honored to be back acting with Kent State University. Her previous theatre experience includes: Spring Awakening, Our House, Voices from Hurt Street, Godspell, Once Upon A Mattress, Grease, Beauty and the Beast, The Sound of Music, and Annie Get Your Gun. Cassandra currently works for Akron Children’s Hospital, hopes to continue acting, and thanks you for coming to the show!

Morgan Brown: Anne
Morgan is currently a sophomore at Kent State Stark, with a major in theatre performance. She has been acting for most of her life, during which time she has had the privilege of playing a multitude of roles, including Oliver in Oliver!, The Ghost of Christmas Past in A Christmas Carol (Players Guild Theatre), Peter Pan in Peter Pan (GlenOak High School), Steph in Reasons To Be Happy and Henrietta in Silent Sky at Kent State Stark. Most recently, Morgan was the Assistant Stage Manager for Consider the Oyster at Kent State Stark. Morgan would like to thank her family and God for their constant love and support, and Brian Newberg for the honor of being involved with this show.

Anthony Antoniades: Zach, Others
Anthony Antoniades appeared in Huck Finn’s Story, Dating Is Tough To Do...And Funny, Too!, Plumfield, Iraq, Buried Child, Blur and These Shining Lives at Kent State Stark, where he also stage managed Songs for a New World and Evil Dead: The Musical, served as lighting design assistant for Anton in Show Business, sound design assistant in Silent Sky and served as crew for Reasons To Be Happy, Almost, Maine, The Bicentennial Project, What We're Up Against and Consider the Oyster. He is a theatre major at Kent State.

Sergio Rosa: Assistant Director
Sergio Rosa was an actor for 11 years in Brazil, as his second job, with the troupe Fraternal Cia de Artes & Malas-Artes. This Brazilian theater company is devoted to research, and the development of texts based on Italian Comedia Dell’ Arte and native Brazilian culture. Sergio also wrote and direct shows about slavery in Brazil, and the role that Capoeira (a unique Brazilian martial art developed by slaves in Brazil) plays. He moved to the United States two years ago, and he is very happy with this opportunity to learn from Brian and his team, and have good times watching the show for free.