Will compete for Miss America in September 2018 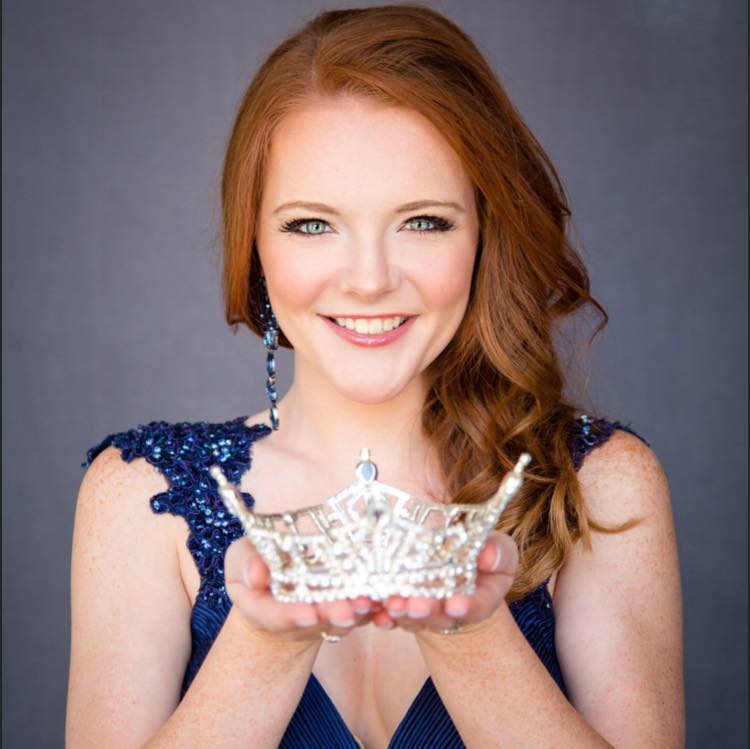 Beauty, brains, poise and talent were on full display at the Renaissance Theatre in Mansfield, Ohio, on June 16 where Kent State University student Matti-Lynn Chrisman bested 19 other beauty queens to win the crown and title of Miss Ohio 2018.

Ms. Chrisman follows in the footsteps of former Kent State students Heather Wells and Sarah Hider who also won the Miss Ohio competition in 2013 and 2015, respectively.

“I was overjoyed when my name was called,” says Ms. Chrisman from Cambridge, Ohio. “Years and years of hard work finally came together and paid off. I couldn't feel my hands or feet. I was above cloud nine.”

Ms. Chrisman, who competed as Miss Maple City, graduated with a B.F.A. in musical theatre from Kent State this past spring, and will be graduating with a B.A. in public communications next fall.

“Going into the competition, I was very excited, but at the same time, I was at peace,” she says. “Any 20 of the women competing for Miss Ohio would have been an incredible representative for our state. This is the first year I've honestly been able to say that I would have been proud and happy for any of my fellow contestants if they'd have been crowned. Knowing that I'd be happy no matter the outcome gave my mind and spirit permission to relax. Because of this, I was able to be 100 percent myself without any nerves or stress getting in the way. I think that helped me a lot throughout the competition.”

Her platform, "Pain Isn't Always Obvious," attempts to end the stigma around mental health and suicide prevention, and was borne out of her own mental health experience.

“For about two years, I struggled with depression and anxiety disorders that broke my entire life apart,” Ms. Chrisman says. “Because of stressful and traumatic events, moving away from home and simply having imbalanced hormones, I felt hopeless and unable to control my own life. I kept my problems hidden, and I was good at hiding them. I was afraid of what others would think of me and how they’d treat me if they knew I was struggling.

“I didn’t want to be labeled or negatively impacted over something I couldn’t control,” she adds. “The longer I stayed silent, the faster my depression suffocated me. I went through suicidal episodes throughout these two years. The state of my mental health kept deteriorating until I was no longer eating or sleeping correctly. It was only when I reached out to my friends and family that I started to find hope again. I made the decision to do anything and everything possible to take my life back. Since then, I have made it my mission to reach out and teach everyone that ‘Pain Isn’t Always Obvious,’ and about the part they can play in mental health awareness and suicide prevention.”

Ms. Chrisman had previously participated in the Miss America Outstanding Teen programs for three years, and only got involved with the pageant after being nudged by a friend.

“I only got started because of my friend Siena,” she says. “She begged me to do a pageant with her. I had no interest, but she said it would be fun. I eventually agreed, competed with her and then won the competition! After that, I caught the pageant bug and decided that this was going to be part of my life.”

She credits her professors at Kent State for helping to prepare her for the competition and also shows appreciation for their support.

“The faculty at Kent State University's School of Theatre and Dance and School of Music have had a huge impact on me,” she says. “Marla Berg, my vocal professor for the last three years, has spent hours listening to me sing, practice my talent pieces and she has acted as a sounding board for me to bounce off ideas. Amy Fritsche and Jonathan Swoboda, two more of my professors, have always cheered me on and believed in my ability in the theatre world, the pageant world and beyond that.

“Eric van Baars, the director of our school, has also been incredibly supportive and kind,” she adds. “Knowing he had two students competing for Miss Ohio this year, he placed an ad in the Miss Ohio program on behalf of the School of Theatre and Dance to wish the two of us good luck. It was really nice to have the support of all these amazing people behind me. I wouldn't have any of these people if I hadn't chosen Kent State four years ago.”

Now that she wears the Miss Ohio crown, she is looking forward eagerly to the Miss America 2019 competition, which will take place in Atlantic City on Sept. 9.

“Preparing for Miss America has been a whirlwind, and it's far from over,” she says. “I will be working with Henri's Cloud Nine in Columbus to create the perfect wardrobe. I have been practicing my talent at least five times a day, and even though they got rid of the swimsuit competition, I still hit the gym every day to keep up a healthy lifestyle to feel my best.”

The Miss America Organization recently scrapped the swimsuit portion of the competition, and although Ms. Chrisman hates to see the fitness and lifestyle component go away, she believes that by doing so, the organization is trying to make the competition more inclusive.

“They're doing everything possible to empower the women who compete for local, state or national titles,” she says. “I hope that this works. I want more people to join this amazing sisterhood and grow from the opportunities it gives you.

She also hopes that the Miss America Organization can find other ways to promote healthy lifestyles as a replacement for the swimsuit phase of the competition so that contestants can serve as role models for young girls.

“The Miss America Organization is the largest provider for scholarships for women in the United States,” she says. “This organization has given me confidence and abilities beyond my wildest dreams. I'm forever grateful for its influence.”

After graduating from Kent State in fall 2019, she plans to spend time performing and exploring other opportunities in the performance industry.

“I think it would be incredible to perform on a cruise ship or spend some time in New York City or LA trying my hand at all the different opportunities the industry has to offer,” she says. “Later down the line, I would love to work in marketing, either for a theatre or a nonprofit. Eventually, I want to go back to school to get my M.F.A. in acting so I can teach at the college level.”