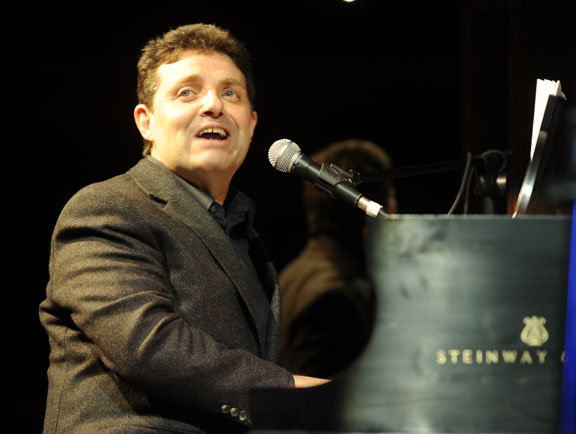 Since the debut of its first season on Netflix on Fri., March 6, new series "Unbreakable Kimmy Schmidt" has garnered rave reviews. Co-created by Tina Fey and Robert Carlock, the show is executive produced by School of Theatre and Dance alumnus Jeff Richmond '85. In addition to his role of executive producer, Richmond composes the music for the new series and composed the show's extremely popular theme song which Wired referred to in a recent article as "perfect." The theme song has been compared to classic television theme songs of the past and is heralded as "impossibly catchy" by The Atlantic, in addition to being praised by Vanity Fair, Slate, and The Huffington Post.  Richmond also directed one episode of the series' first season, entitled "Kimmy's in a Love Triangle!"

Richmond, who is also married to Tina Fey, was recognized during Kent State's May 2013 commencement ceremonies with an honorary doctorate. He previously served as music director for Saturday Night Live, composed the music for and produced NBC's 30 Rock, and composed the score for feature film Baby Mama. He serves as executive producer for the upcoming feature film Sisters starring Tina Fey, Amy Poehler, and Maya Rudolph.

Richmond is not the only Kent State alumni involved in the production of "Unbreakable Kimmy Schmidt" and its catchy theme song.  2013 BFA Musical Theatre graduate Therese "Tee" Boyich is the featured female vocalist for the series' theme song. She can also be heard as Yuko the Robot in the episode "Kimmy Goes to a Party!"