When senior Alex Pinkerton began looking for computer information internships, he ran across a listing on Kent State’s career management tool for a position at Lucky Shoes, a retail establishment founded in 1919.

Here it is four months later, and Pinkerton is an e-commerce specialist for Lucky Shoes handling sales for the company’s website. Pinkerton helps load the data on the website, assists with internet fulfillment and handles the UPC codes (universal product codes) and images of the merchandise.

“It’s great,” said Pinkerton, a computer information systems major who plans to graduate in spring 2023. “I’m very thankful to have the opportunity to be here. I’ve learned a lot since I’ve been here.”

Pinkerton is one of several Kent State students who John Luck, president of Lucky Stores, has recruited to work at Lucky Shoes.

“We hire a lot of interns from Kent State’s fashion merchandising program,” Luck said. “It is one of the best programs in the world. Currently we have three other interns in our internship program.”

Sometimes Luck loses interns when they leave to study abroad, but there have been tremendous success stories of other interns who have moved right up the corporate ladder.

Take for instance Kent State alumna Emily McCullough, BS ‘19. Luck heard that McCullough was working at a restaurant near one of his stores, so he and his buyer went over and told her that Lucky Shoes has an internship for fashion merchandising majors. 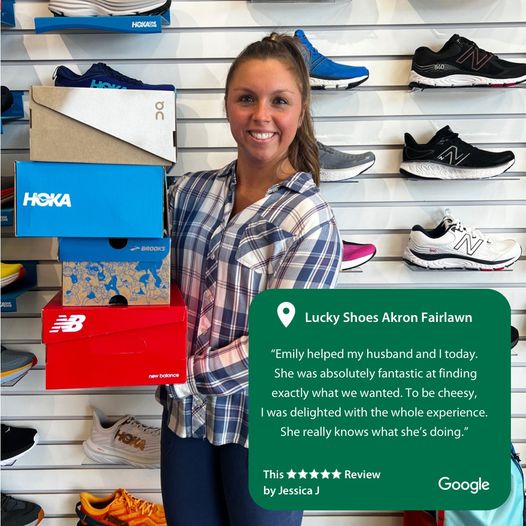 “She came on as an intern seven years ago,” Luck said., “Then she became an assistant buyer, then buyer, then head buyer. I was merchandising manager, and I said 'here’s the keys to the company, take over.' She’s 26 and she is a merchandise manager for a big-sized company.”

“We took her on a buying trip with us and the questions she asked were so intelligent and well thought out,” Luck said. “We’d like to keep her.”