There are a lot of reasons to celebrate the release of Night Ranger’s “Hole in the Sun,” notably that it marks the band’s first studio album in a decade and commemorates the pioneering hard rock outfit’s 25th anniversary as a band. But as has been the case throughout Night Ranger’s heralded career, the best reason to celebrate is the music itself.

“People will hear this record and recognize our dual blazing guitars and vocals, and big choruses and melodic verses, because that’s definitely how you can describe this album,” explains singer/bassist Jack Blades of the new release, the band’s eighth studio album, and first for VH1 Classic Records. “It’s new Night Ranger, but in a lot of ways it’s classic Night Ranger.”

“Classic Night Ranger…” Three simple words that could start their own chapter in the complex history of commercial hard rock, as the core trio of Blades, guitarist Brad Gillis and drummer/vocalist Kelly Keagy are responsible for penning a handful of the ‘80s landmark hits, from one of the most defining and immediately recognizable epic power ballads of all-time in “Sister Christian” and the similarly-slowed tempos of “Sentimental Street” and “When You Close Your Eyes,” to the guitar-driven radio juggernauts “(You Can Still) Rock in America” and “Don’t Tell Me You Love Me,” Night Ranger are a rare band whose signature sound is more recognizable than their blue collar, every-man image. 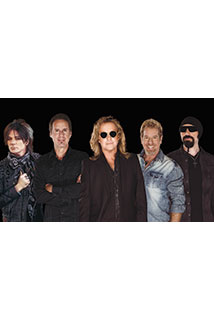