Cece Bell, alumna of the School of Visual Communication Design (VCD) earned the Geisel Honor Award for her early childhood chapter book Rabbit and Robot: The Sleepover at the American Library Association’s (ALA) Youth Media Awards event. The Awards were held at the Washington State Convention Center on Monday, January 28. Bell will receive the award at the ALA Conference in June. Bell is a 1998 graduate of the VCD Master of Arts program at Kent State University.

The Theodor Seuss Geisel Award is a literary award by the ALA that recognizes the author(s) and illustrator(s) of an outstanding book for beginning readers. The award is named for Theodor Geisel, better known as Dr. Seuss.

This year’s award winner was Ethan Long for his book entitled, Up, Tall and High! Three Geisel Honors were given to: Mo Willems for Let’s Go for a Drive!; James Dean for Pete the Cat and His Four Groovy Buttons; and Cece Bell’s Rabbit and Robot: The Sleepover.

Carolyn Brodie, Ph.D., Kent State University professor in the School of Library and Information Science, served as emcee for the Youth Media Awards event in her role as President of the Association for Library Service to Children (ALSC), an ALA division dedicated to the support and enhancement of library services to children. Brodie announced Bell's award at the event.

Cece Bell has worked as a freelance illustrator and is now a full-time author and illustrator, living and working in Virginia. She and her husband, Tom Angleberger, were both art majors at the College of William and Mary. Angleberger is responsible for the Origami Yoda series. Bell earned a graduate degree in illustration and design at Kent State University. Bell’s character Jerry Bee from Bee Wigged, is named for the School’s own Jerry Kalback, VCD professor and undergraduate coordinator. View more of Bell’s work on her website. 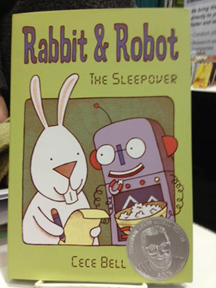