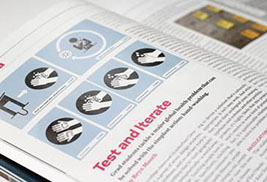 The August 2014 edition of PRINT Magazine featured a story about a semester-long project led by Kent State University Associate Professor Ken Visocky O'Grady's graduate seminar students in the School of Visual Communication Design. The article is titled "Test and Iterate: Grad Students Tackle a Major Global Health Problem That Can Be Solved With the Simplest Action: Hand-washing."

“PRINT Magazine is one of the most respected publications in our industry, and it is an honor to have them do a spotlight on us," says Visocky-O'Grady. "I'm really excited that our school is getting coverage in publications that reach broader audiences, not just academic ones. It's one of the best ways we can get our name out there." The featured project began in the fall of 2013 when Justin Ahrens of Rule29 design firm – a previous project partner of Visocky O'Grady – recommended Visocky O'Grady's students to his new client, Lifewater International. Lifewater is a nonprofit water development organization that is currently working to promote the education of hand-washing to prevent the spread of diseases like Ebola. The graduate seminar students' task was to create a new curriculum to teach hand-washing across the African continent and to any developing nation where Lifewater operates. The students studied photos of the environments for which they were designing the curriculum. The visual communication problem they faced was that to develop a curriculum specific to each country where Lifewater works would be both time consuming and costly.  To overcome this, the students discovered that a universal icon-based system could be understood by a wide array of cultures and dialects. “Done well, these visual symbols could work, and they could work everywhere," Visocky O'Grady says in the article. The students created a series of drawings and graphics, which will be tested by Lifewater International in the near future. Visocky O'Grady hopes that his future graduate students can continue to build on this project based on the results of current testing.