Four Kent State University creative groups won awards at the 2013 Akron ADDY Awards. The competition was hosted by American Advertising Federation-Akron. Kent State’s University Communication and Marketing; The Tannery, the student-run creative agency and integrated marketing firm of the College of Communication and Information; and Glyphix, the student design and illustration studio with the School of Visual Communication Design, all received multiple awards. University Communications and Marketing won five awards, including two Gold ADDYs and two Judge’s Choice awards. The Tannery won two ADDYs, including one Gold ADDY, and Glyphix won four ADDYs. In addition, The Burr, a student-run magazine, won a Silver ADDY. Winners of the awards include a mix of faculty and students. 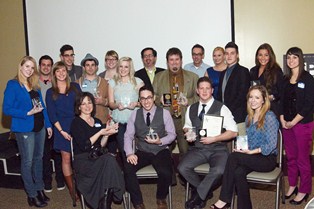 The AAF-Akron is the local chapter for the national AAF Trade Association. The trade association recognizes incredible creativity, writing, design and project management in all forms of advertising across various types of mediums. The AAF’s ADDY Awards Competition provides three levels, including local, district and national.

Dan Karp, executive director of creative services for University Communications and Marketing, believes it is very important to share these awards with the schools and groups the marketing and communications department does this work for.

“They share their creativity and input throughout the entire process,” Karp said. “They should share this award with us.”

“I was surprised,” Zehner said. “It felt great to have my work recognized.”

The Tannery is also relatively new to the ADDY scene. It opened just a few years ago. Evan Bailey, Tannery operations manager, says he was very pleased with the outcome.

“It was very exciting to be recognized alongside the area’s best marketing and advertising firms,” Bailey said. “When we found out we won a Gold ADDY in the professional category, we were especially thrilled.”

Assistant Professor Valora Renicker, the creative director for Glyphix, was also happy with the studio’s accomplishments.

“Regardless of whether they are students or practicing professionals, the ADDY Awards are a well-respected competition in the advertising, marketing and design community,” Renicker said.

The Burr received a Student ADDY in the Collateral Material category. The magazine won silver for its publication design of the Spring 2012, Issue 1 cover.

“It is our goal to ensure the Burr remains a standard of excellence in the School of Journalism and Mass Communication,” said Anthony Dominic, editor-in-chief of The Burr. “This award is not only a reminder that our students are succeeding at that, but it’s an inspiration to continue in our efforts.”

All of the Gold ADDY winners will advance to the regional competition. From there, any winners have a chance to win a national award. Those results will not be disclosed for several more months.

Here is a complete list of 2013 Akron ADDY Award winners from Kent State: